And he vowed to vigorously fight San Francisco city attorney Dennis Herrera, who threatened to sue MonkeyParking if it doesn’t pull its iOS app, which has San Franciscans bidding for parking spaces, from the App Store by July 11.

“We will fight this,” Dobrowolny told VentureBeat from Rome today. “Just to be clear, I want to tell him (Herrera), we’re not selling parking spots. We’d actually like to be regulated in what we do. We’re hoping the politicians see the truth.”

Dobrowolny said the firestorm created in San Francisco over his controversial app was more than just an eye-opener. It floored him, as he sat in his flat in Rome watching the controversy unfold on the ‘Net.

“I knew people were upset. But I didn’t expect the politicians to react like that,” Dobrowolny said. “We’re still at the early stage with Monkey Parking right now. We are making corrections and fixing bugs every day.”

MonkeyParking initially launched in Rome earlier this year and beta tested its app with Italian drivers there who face the same torturous parking conundrum as drivers do in San Francisco. The app has drivers leaving a public parking space on city streets the option to hold it for others. If they do, they’ll reap a cash reward. Geolocation features help drivers vector in on the parking spaces they crave. 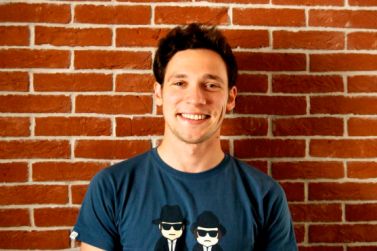 The app — and ensuing reaction by San Francisco pols — has created a storm of controversy. When the ambitious Herrera learned about MonkeyParking in this gentrification-sensitive city, he launched a harsh broadside against Dobrowolny, saying while technology can be a positive change in peoples lives, MonkeyParking wasn’t one of them.

Herrera could not be reached for comment. Nor could his spokesperson, who did not respond to email sent to his Linkedin account.

MonkeyParking is actually three guys in total, all from Rome, who bootstrapped the app with their own cash. Dobrowolny told VentureBeat he splits his time between Italy and San Francisco, and will soon arrive in the city to begin cleaning up the political and legal mess with his lawyers.

And to make sure MonkeyParking gets the traction he said it deserves.

“We’re not selling parking spaces. No,” the irked Dobrowlny said. “And we believe the Monkey Parking app model is the right one.”

The MonkeyParking team describes their technology as a social sharing app that is all about communication for those looking to park their cars. When spots in a given neighborhood become available, the app notifies users with pings. MonkeyParking is adamant that it is not in the business of selling or leasing spots on public city streets.

Herrera called the app illegal. “We will not abide businesses that hold hostage on-street public parking spots for their own private profit,” Herrera wrote.

Even so, ParkingMonkey has drawn the ire of others in the mobile parking space.

“I love innovation and disruptive technology but I don’t think he (Dobrowlny) understands what he’s saying. It think MonkeyParking will cause more problems, like parking rage,” Eskinazi said.

Eskinazi said his app is legit. And it’s popular in England.

“Our business has been around for eight years and is profitable, and I’ve met the Queen and been to No. 10 Downing Street [British prime minister’s address]. And they all support it,” he said.

Eskinazi’s app lets people rent out space in their garage or driveway, not on-street parking spaces. Parkatmyhouse says it has 500,000 users worldwide, pulled in $10 million last year, counts BMW as a financial backer, and will soon unveil a mobile app in the U.S.

To be sure, the blowback from Herrera and other San Francisco residents to MonkeyParking has been a shocker to Dobrowolny and his team. MonkeyParking released a statement addressing the controversy on its website this morning. Read part of it below and clink here for a link to the full statement.

The cease and desist letter that we received from the City of San Francisco is premised on a fundamentally wrong assumption: that our application purports to allow users “to buy and sell” parking spaces. That is not the case.

The shared economy trades on information, not on goods or services or other commodities. We are very surprised that the City of San Francisco, which prides itself of being a liberal and tolerating city, does not see that their cease and desist letter is an open violation of free speech, contrary to the First Amendment of the US Constitution (“I have the right to tell people if I am about to leave a parking spot and they have the right to pay me for such information”).

We are consulting with legal counsel as we speak but we are confident that we would prevail any such legal challenge against our service.

“MonkeyParking is about the availability of parking. What we’re all about is helping out,” Dobrowlny told VentureBeat.

Stay tuned, as there will certainly be more developments soon in this parking battle.