In a perfect world, we’d all be able to whip out our smartphone and have it capture a perfect rendition of the document we want to scan. Of course, that simply isn’t possible with today’s smartphones, which is why we often resort to using the on-board camera instead.

It’s far from ideal. We end up with a photo, not a scan. Colors are off, lighting is hit-and-miss, and straight lines and other shapes can be badly skewed.

And while there are a few very portable wireless document scanners on the market that can deliver decent scans, they suffer from two significant issues: Despite being smaller than so-called briefcase scanners, they’re still not small enough to be considered pocket-sized, and, from all accounts, getting a really good scan from these “sticks” can be a frustrating exercise in trial and error.

Alex Ilic, CTO and founder of Dacuda, wanted a better solution.  In an interview with VentureBeat, he said, “People want mobility and you don’t get anywhere near the same quality taking a photo with a phone.  And existing ‘portable’ scanners aren’t portable at all — they are heavy and noisy. We wanted to build something with a simple push-button application that could be used wherever and whenever.” 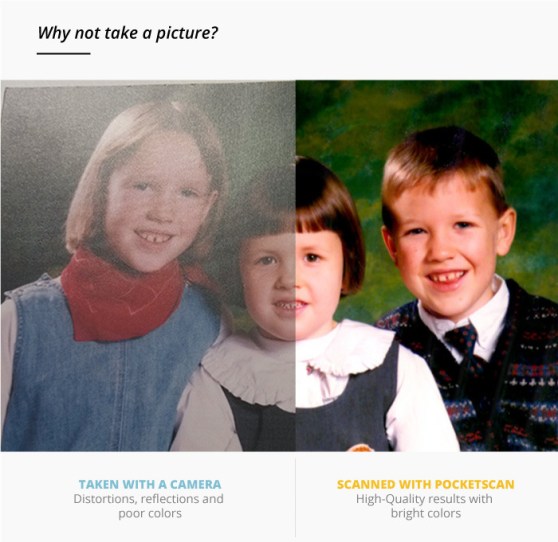 And so, the PocketScan was born. Backed by several technology patents, the PocketScan is exactly what its name implies: A tiny palm-sized device that lets you scan almost any kind of 2-dimensional surface directly to your iPad or Android tablet via Bluetooth. It has an internal battery that should last for 400 scans and is charged via micro-USB. The free software  (which is compatible with PC/Mac/iOS/Android) is what makes the PocketScan do what no other portable scanner can: Show you your scan in real-time on your device so that you know exactly what you’re getting. 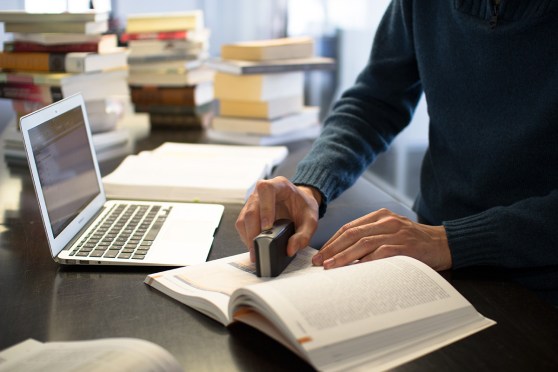 To scan a document, simply press and hold on the PocketScan’s single, top-mounted button and glide the device in a back-and-forth zigzag motion all the way from the top corner of your document to the bottom. If you’ve ever used Microsoft’s PhotoSynth app to capture a 360-degree image using your phone, you’ll be familiar with the way this works. Instead of requiring the user to accurately and evenly drag a page-sized wand down a document, the software does all the hard work for you. Other scanners are limited to documents that fit their scanning width – if you need something bigger or irregularly-shaped, you’ll be stuck stitching together several scans to make a single file. Not fun. The PocketScan, on the other hand, is like the Honey Badger: It really doesn’t give a shit. Large, small, evenly spaced or crooked as hell, the PocketScan treats all scanning jobs the same. Start where you want and keep going until you’re done.

The software does more than show your scan in-progress. It’s actually capturing the scan data to your device in real-time, meaning that scans are always stored on your iPad or other smartphone and not in the PocketScan hardware.  Once complete, the scan can be immediately run through the software’s built-in Optical Character Recognition (OCR) feature, which means that scanned text can be instantly edited in an app like Microsoft Word. Better yet, if you’ve scanned a table, that too will be recognized and sent to Microsoft Excel.

There are however, two potential down-sides to the PocketScan. First, it can only acquire scans at a maximum resolution of 420 dpi. Now that is plenty for 1:1 print purposes where you intend on printing your scan at the same size as the original, but if you were hoping for a tool that can match the capabilities of  a high-end flatbed scanner (at 1,200 dpi+), you might want to wait and see what Dacuda comes up with for their next version of the PocketScan.

Second, because the PocketScan relies on the target device (an iPad, iPhone etc.) to do all of the heavy lifting from a processing perspective, it isn’t compatible with some older, yet popular products. The first and second-generation iPads, for instance, won’t cut it and neither will the first generation iPad mini. It will work with an iPhone, but only if it’s an iPhone 5/5c/5s running iOS 8.

If you’re unsure about backing the campaign, don’t worry; this won’t be your only opportunity to pick up a PocketScan. “We have extensive experience with retail so yes, our vision is to see PocketScan in retail stores soon,” says Ilic. While “soon” might be vague, it’s likely it won’t happen until the Kickstarter backers have received their units (slated for December of this year) and the price will be higher — $150 is the MRSP.