Shovel Knight is an action-platformer for Wii U, PC, and 3DS. It has a distinct 8-bit art style reminiscent of classics from the Nintendo Entertainment System. However, its love for that era of gaming becomes even more apparent when you start playing it.

Best of all, you’ll quickly discover that it’s actually just as good as the masterpieces that inspired it. 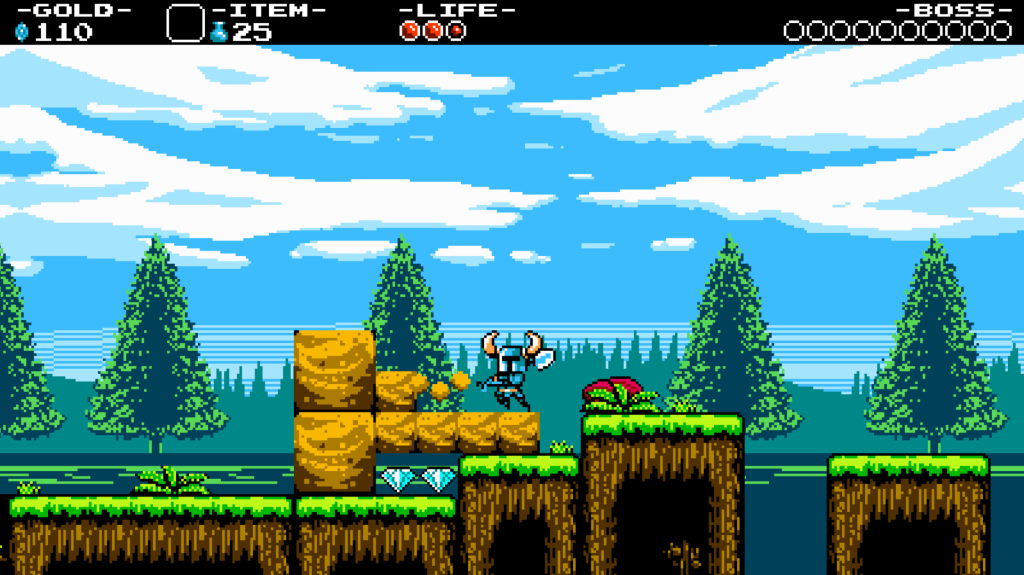 Above: He shovels well.

Shovel Knight is an amalgamation of many 8-bit classics. Like in Ducktales (which itself received a recent remaster), you can bounce off of enemies and objects with a downward shovel strike from the air. You also have items that work as alternate attacks, just like in Castlevania.

But Shovel Knight clearly takes most of its inspiration from Mega Man. The running and jumping physics feel almost identical (although Shovel Knight jumps higher than the Blue Bomber ever did), and you have eight levels to fight through, each with a unique, themed boss at the end, before you reach the villain’s lair.

Retro gamers will notice even more 8-bit nods. The world map is similar to the ones from Super Mario Bros. 3, and visiting towns and talking to the residents there feels a lot like Zelda II: The Adventure of Link. However, Yacht Club Games has taken all of these elements and created something with a new identity. At no point does Shovel Knight feel like a Mega Man or Castlevania rip-off. It mixes them together beautifully while adding some new, modern ideas.

For example, death in Shovel Knight works very differently than it does in Mario or Zelda. You don’t have any lives. Instead, you collect gold during your adventures, which you can then use to buy new items, armor, attacks, and health and magic upgrades. All of those are incredibly important, especially as the levels begin increasing in difficulty. 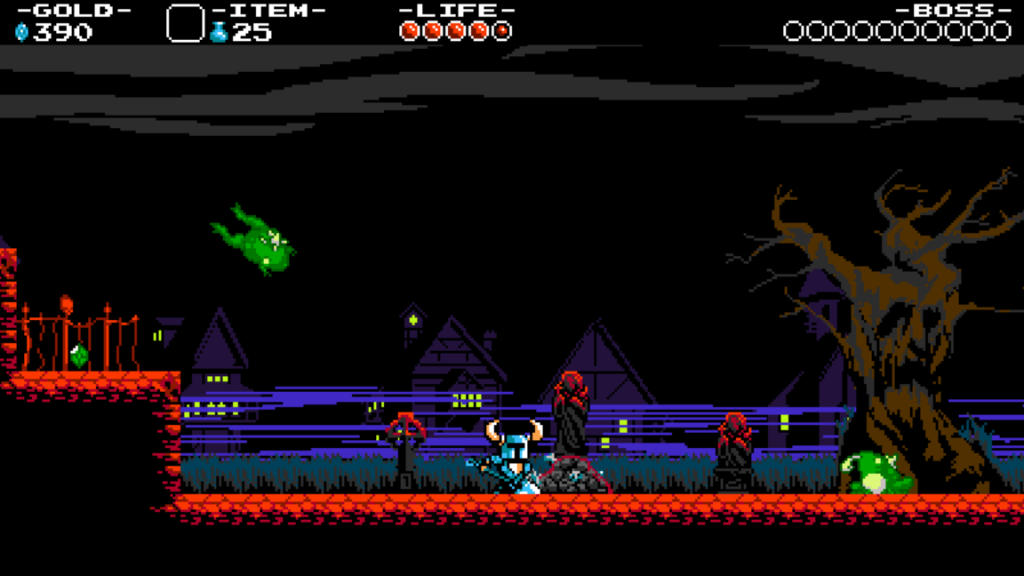 Above: You always knew things were about to get scary in old games when the background had wispy clouds.

However, you lose some of your gold when you die. It then turns into money bags that float around the area you perished. You can recollect them, but they’ll disappear if you die again before you nab them. It’s actually very similar to how Dark Souls handles character death. Just like in that brutal game, you’ll want to spend your money as quickly as you can — because you might lose it.

It’s actually a brilliant addition to an action-platformer. You never have to worry about running out of lives or having to start a stage over from the beginning (Shovel Knights levels, while hard, offer multiple checkpoints), but you still have a tangible punishment for dying.

Speaking of dying, you’re likely to perish a few times when you face off against Shovel Knight’s bosses. Each one has a distinct personality and creative attack patterns. They offer a great challenge without ever feeling cheap or overpowered. Besides the bosses you fight at the end of each level, you’ll also encounter a few wandering around the world map. Touching them triggers optional, self-contained boss battles that are just as interesting and challenging as the others. 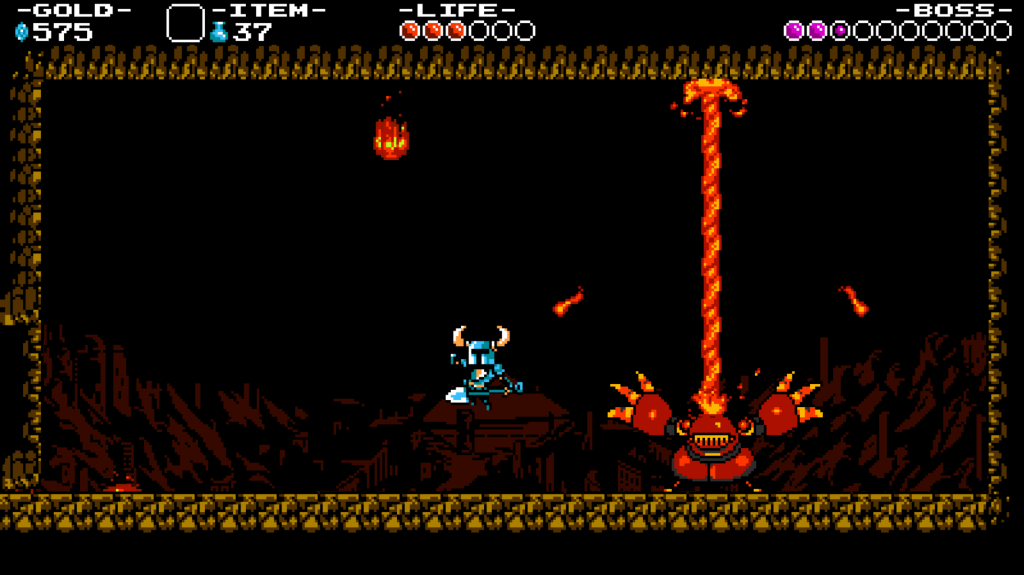 Above: One of Shovel Knight’s great bosses is a bit of a hot-head.

I talked about the Castlevania-style items before, but they really deserve a bit more attention. Unlike in Castlevania, in which you would find items hidden in the levels, you buy everything from a shop dealer. Once you purchase an item, you can select it from your inventory at any time, Mega Man-style. Each one also takes up a bit of your magic meter, so you can’t just throw them around with abandon.

Some of the items are clear copies of those from Castlevania. Instead of a tossing knives, you shoot fireballs. Instead of throwing an ax in an upward arc, you fling an anchor. Some of them, however, are more unique, like one that grants you a second of invisibility. Another lets you quickly punch through large blocks. Many of them have uses outside of combat and help you explore hidden areas.

Bosses don’t have straight-up Mega Man-style weaknesses, but certain items definitely work best for them. For instance, you’ll want to throw those anchors at bosses that spend a lot of time in the air. The point is that the items give you a lot of options in and out of combat, and they help break up the monotony of constant shovel swiping. 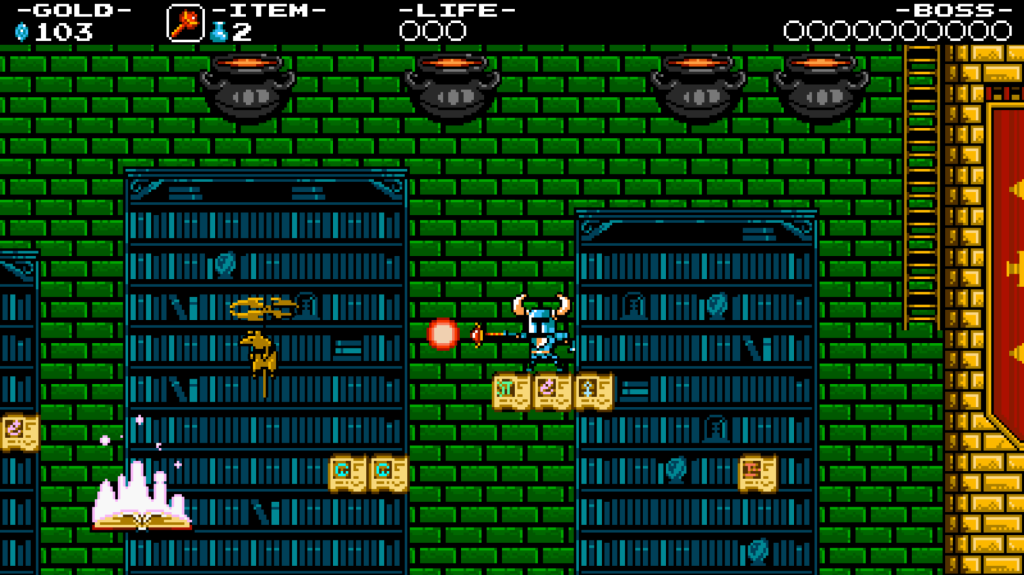 Above: Fireball! It’s simple but effective.

It may not be hard enough

Shovel Knight is certainly no cake walk, but it’s also not quite as difficult as its 8-bit forebears. Unlike Mega Man 2 or Castlevania, you could easily beat it in a couple of days. Part of that is because of the generous checkpoints and the lack of lives, but the level design is also just not as brutal.

Now, for many, that’s a positive. You won’t find any cheap deaths, and you not very likely to throw your controller at your sibling in frustration. Still, I sometimes wished Shovel Knight was a bit more punishing. For example, you can carry two potions with you at any time that refill your life and magic, kind of like the E-tanks in Mega Man. However, while those were pretty much essential for most players to beat those brutal platformers, the potions in Shovel Knight feel like too much of a safety net. I would barely beat a boss and feel incredibly triumphant, only to remember that I had two unused potions sitting in my inventory. It takes away from the feeling of victory a bit.

I’m not saying that Shovel Knight is easy. It’s still a challenging platformer. It’s just not as brutal as some might expect.

Sure, classics inspired it, but Shovel Knight could soon be a classic of its own.

Shovel Knight is out June 26, 2014 for the Wii U, 3DS, and PC. The developer provided GamesBeat with a digital copy of the Wii U version for the purposes of this review.