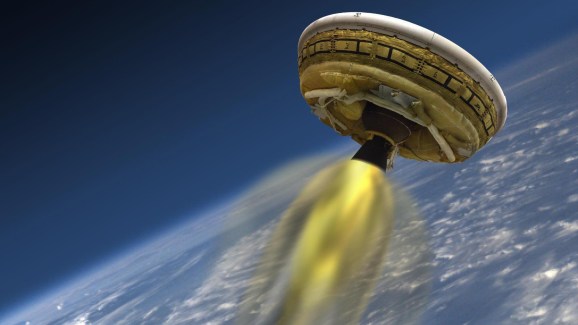 To land a spacecraft on Mars, NASA needs to test a bunch of tech here on Earth. That’s why the space agency plans to launch a saucer-shaped vehicle into the sky at 11:15 AM pacific time today.

After several delays, NASA says it will finally test its “Low-Density Supersonic Decelerator” (LDSD) vehicle today. The craft contains several technologies key to landing large payloads on Mars, which has an atmosphere 99% thinner than Earth’s — making it difficult to land a spacecraft gently on the red planet’s surface.

NASA has equipped the LSDS with a 100-foot-wide parachute and a balloon-like device capable of rapid inflation, a “Supersonic Inflatable Aerodynamic Decelerator” (SIAD).

To duplicate the thin Martian atmosphere, NASA will bring its LDSD craft to roughly 120,000 feet with a giant helium balloon (and we mean giant: fully deployed, it’s 34 million cubic feet, bigger than an entire football stadium). Then the balloon will detach and a rocket motor will kick in, boosting the craft to 180,000 feet – and to the supersonic speeds required to test the SIAD. When the vehicle hits Mach 4, the 20-foot SIAD will inflate, increasing the craft’s surface area and slowing it to about Mach 2.5 — a speed at which it’s safe to deploy a supersonic parachute. Finally, everything will touch down into the ocean, where NASA will recover the craft and its equipment. 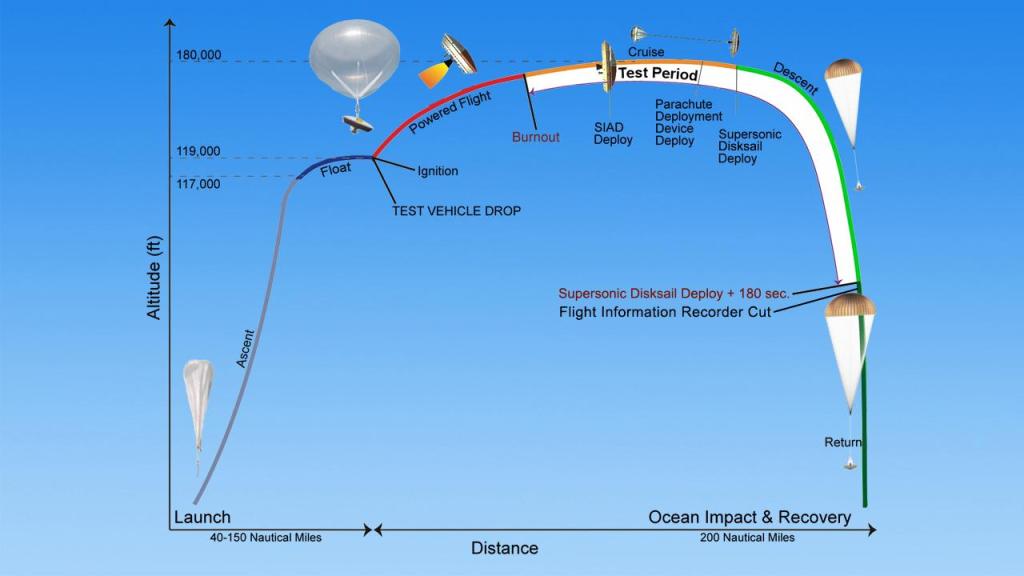 Above: NASA’s flight plan for its LDSD craft.

At least, that’s how NASA envisions the test. The agency notes that it’s a risky mission with unproven technologies. But whether or not the test is successful, NASA will gather extremely valuable data — and it’s thrilled to take the LDSD out for a spin.

And we’re thrilled we can watch the whole event from the comfort of our desks. The launch window extends from 11:15 AM to 12:00 PM pacific time. The balloon will take two or three hours to achieve float conditions, after which the test vehicle will drop away from the balloon and begin its supersonic ascent. NASA will livestream the test to UStream, which you can watch below.