Your new encrypted smartphone is now ready to order.

Pre-order actually. The new Blackphone, a smartphone that touts itself as impervious to NSA cryptographers, is almost market ready. Not officially on the shelves of Verizon or T-Mobile yet, the phone is a collaboration between Swiss-based SilentCircle and Geeksphone, which now call themselves SGP Technologies. 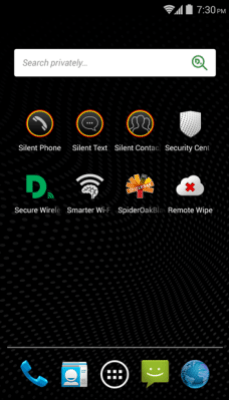 At the heart of smartphone is its new Android-centric operating system, called PrivatOS. The Blackphone comes with built-in industrial grade encryption that protects IMs, voice, video, and chat, according to the designers. The Blackphone costs nearly $700, and you can now pre-order it online.

The Blackphone is partly the brainchild of security guru Phil Zimmerman, perhaps best known as the inventor of encryption tool PGP, which garnered raves when it was released in 2010. The Blackphone is sexy and slim, with a 4.7-inch display, quad-core 2GHz system-on-a-chip processor, and 1GB of LPDDR RAM.

In terms of connectivity, Blackphone has a single Micro-SIM slot, Bluetooth, a Micro USB, and a 3.5 millimeter audio jack. And, yes, it comes with a camera.

Blackphone comes unlocked, and its encryption technology comes loaded on the phone. The Blackphone is indeed black and looks like a smaller version of Samsung’s Galaxy line of smartphones. It compatible with any GSM carrier.

Blackphone was initially unveiled at the Mobile World Congress and almost undoubtedly elicited interest from the National Security Agency.

I’m waiting to get my hands on one. Stay tuned.