Google has its own Android microconsole platform coming later this year on a variety of set-top boxes and televisions, which means it will need its own gaming controller. It looks like it has one ready to go.

Images of the Android TV gamepad leaked online today (as spotted by Business Insider), and the input device looks a lot like Microsoft’s Xbox One controller. The biggest difference is that Google arranged the analog sticks symmetrically like Sony always does with its DualShock line of controllers. In addition to the face, shoulder, and directional buttons, this new joypad also has Android-style buttons for home, back, and menu. 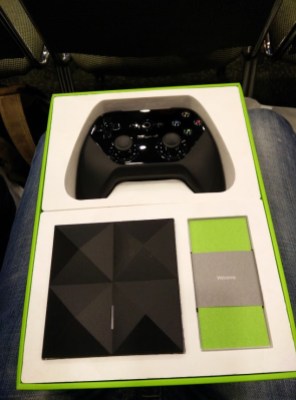 We’ve reached out to Google to confirm this is the final design as well as pricing and availability, and we’ll update this post with any new information.

Google announced Android TV last week at its annual developer conference in San Francisco. This is the company’s attempt to take on the living room with its open-source operating system. Like with standard Android, Google isn’t focusing on building its own product. Instead, it is offering Android TV to third-party companies like Razer and Asus that will build their own set-top boxes and microconsoles. TV manufacturers, like Sony, are also planning to build new sets that feature Android TV. While this OS will play games, Android TV is also for streaming video content, accessing app, and searching the web.

We’re seeing more and more microconsoles like Amazon Fire TV, Ouya, and now Android TV. People spend a lot of time in their living rooms consuming content from one big screen, and a number of companies want to act as the distributor of that content. Of course, millions have already chosen traditional consoles like PlayStation 4 and Xbox One for that job, so the microconsole war seems like one that no one asked for.

While Google might have its own controller, it’s likely that companies like Razer and Sony will pack in their own input devices with their systems. It’s possible that Google is building its gamepad just as a reference for third-parties.