Video ads can increase ad revenue in games without hurting the retention of gamers or the purchases they make, according to a study by ad mediation firm Fuse Powered.

Toronto-based Fuse Powered studied millions of ad impressions for games for 15 days prior to adding interstitial video ads (which run in the middle of a pause during a game) and 15 days after adding them. The result was a 300 percent increase in eCPM (effective cost per mil, or ad revenue generated per 1,000 impressions) and a 700 percent lift in average revenue per daily active user (ARPDAU). Fuse Powered said that these ads did not affect rates of retention and in-app purchases — something key the mobile gaming industry, which brought in nearly $16 billion in 2013. 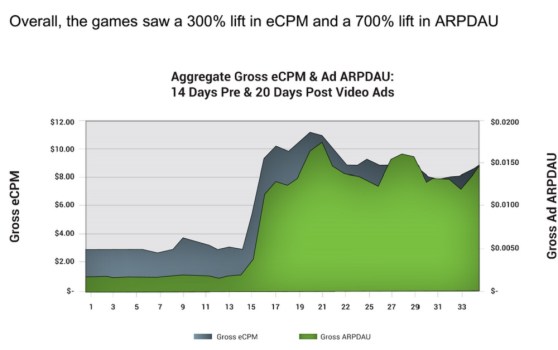 In one tower defense game, eCPMs saw a 400 percent increase, moving the average gross eCPM from $4.02 to $19.83. During the same time, average revenue per paying user (ARPPU) remained flat, which indicates no loss in in-app purchases. This is important, because these account for the bulk of a free-to-play game’s standard revenue. During the same time, first-time in-app purchases increased slightly.

The inclusion of one video per player per day in a word game delivered an increase in ad ARPDAU of 40 percent. ARPPU from in-app purchases remained stable in the word game. Ad revenue in the game increased from 38 percent to 45 percent of total revenue, resulting in a 7 percent increase in total revenue from the game, with the addition of only one video ad per player per day.

Meanwhile, a racing game saw similar results. Over 31 days, video ads did not affect in-app purchases. During the same time, ad revenue grew from 3 percent to 22 percent of total revenue. The average number of sessions per user during this same time also trended up slightly.

And in a strategy game, the inclusion of video ads saw global eCPMs of $29.43 over the first 28 days. Retention was steady in the same period.