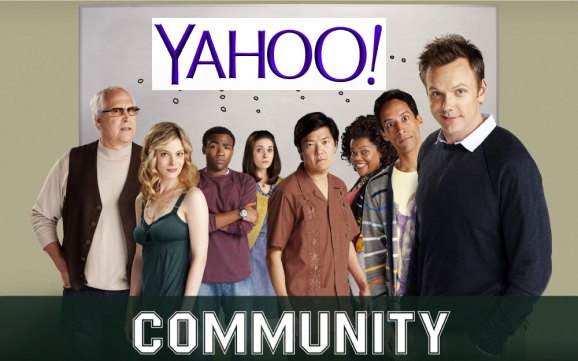 Fans of popular television series Community have a reason to ditch their Google-related services in favor of Yahoo.

Today, Community creator Dan Harmon announced that the series would be getting a sixth season following NBC’s cancellation of the show earlier this year. Talks for a sixth season first started with Hulu, but the streaming service decided to pull out at the last minute.

“I am very pleased that Community will be returning for its predestined sixth season on Yahoo,” said Harmon in a statement. “I look forward to bringing our beloved NBC sitcom to a larger audience by moving it online. I vow to dominate our new competition. Rest easy, Big Bang Theory. Look out, Bang Bus!” [Note: Classic Harmon, and no, that last one isn’t safe for work to look up.]

The move is great news for Community fans, but it also very telling when it comes to Yahoo’s strategy toward premium video content — essentially, the company wants into the streaming video game in a big way.

Just today, Yahoo managed to forge a deal with HBO to make the first episode of its latest original series The Leftovers available via its site. Over the last year, Yahoo has managed to sign notable content deals like an exclusive agreement for Saturday Night Live clips, hired top TV-level talent like Katie Couric, and even launched or produced a handful of original web series from big name stars like Tom Hanks and Jack Black. Additionally, Yahoo is also rumored to be launching its own streaming video service that would compete directly with YouTube — specifically, the content from premium channel creators.

But none of those things are quite as powerful as resurrecting a near-dead cult television sitcom. This strategy debuted successfully for streaming video service leader Netflix when it gathered the cast of Arrested Development for a new season after years of hiatus. The move helped Netflix kick of its entire slate of original shows, and now Yahoo has the opportunity to do the same — whatever its final plans are for streaming video.