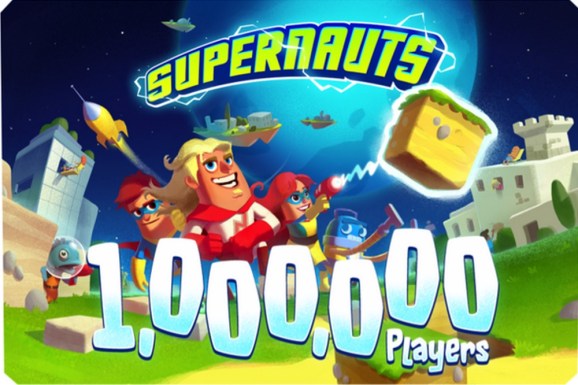 Grand Cru’s Supernauts, an ambitious social world-building game that was built over two years, has hit a million downloads in just six days after its release on iOS.

That’s good news for the Helsinki-based Grand Cru, which raised venture capital funding to build the free-to-play game and tap into a multibillion dollar industry. The publisher said that the game received editor’s choice nods in 40 countries in the Apple App Store and has ranked in the “best new games” category in 155 countries.

Of course, now the challenging part will be to hang on to those users and to get them to spend money. But the signs are good for the game, which taps into the craze for world-building started by games such as Minecraft — a game that has sold millions of copies on mobile, consoles, and PCs.

Grand Cru billls Supernauts as the “most ambitious iPhone, iPad, and iPod Touch game of all time.”

If this succeeds, it will be one more example of how Finland is home to the premier mobile game hubs of the smartphone and tablet era. Other prime example’s of Helsinki’s success include Rovio, the maker of Angry Birds, and Supercell, which created Hay Day and Clash of Clans (one of the biggest money-making mobile games of all time). Apple is featuring Supernauts on the Apple iTunes App Store today.

Supernauts is set in a cartoon world of the future where the polar ice caps have melted and the player has to build a new habitat for humans on asteroids in space. You build use touchscreen controls to build 3D objects and characters. And while you are doing it, other players can join in, helping you create items in the same 3D space. The worlds are limited in size and scope, based on the size of the asteroid. But you can build on multiple asteroids. It already has more than 50 missions where players can rescue humans on Earth.

In the game, players can build amazing worlds in a relatively short time. In one to two days, you can have your own little village in space. And within weeks, you can have a unique custom world that reflects your own creativity. Players can create themed worlds in worldwide contests. Players can also set up teams to compete against other teams in tournaments.