Hundreds of thousands of people die annually because the demand for organs far exceeds the donor supply. Artificial organs could save those lives — and scientists just made a huge breakthrough in the field by “bio-printing” artificial vascular networks.

Researchers from the University of Sydney, MIT, Harvard, and Stanford have successfully bio-printed blood vessels, offering 3D-printed organs access to nutrients, oxygen, and waste-disposal routes, according to a study published Monday.

“While recreating little parts of tissues in the lab is something that we have already been able to do, the possibility of printing three-dimensional tissues with functional blood capillaries in the blink of an eye is a game changer,” said Dr. Luiz Bertassoni, the study’s lead author and a University of Sydney researcher. 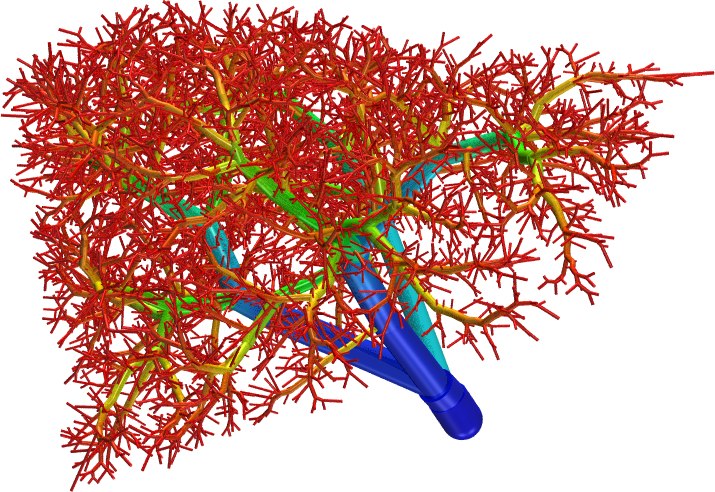 Above: The vascular network of the human liver.

To 3D print vascular networks, the researchers fabricated fine, interconnected fibers with an advanced bioprinter. Then they coated those fibers with human endothelial cells — these sit between circulating blood and vessel walls in the interior of blood vessels — and subsequently applied a protein-based material. They hardened the whole structure with light, then delicately removed the fibers, leaving behind a complex network of hollow cell material. After a week, those cells organized themselves into stable capillaries.

Cells inside the bioprinted vascular networks survived, differentiated, and proliferated at better rates than cells that received no nutrient supply, the study found.

“Imagine being able to walk into a hospital and have a full organ printed — or bio-printed, as we call it — with all the cells, proteins, and blood vessels in the right place, simply by pushing the ‘print’ button on your computer screen,” said Bertassoni.

That’s still “far away,” he said, but this new research is a key advancement toward achieving that goal.

Scientists have had some earlier success growing blood vessels in labs, engineering veins by taking donated blood vessel cells and placing them on tubular, biodegradable scaffolding. But 3D printing technology could make the process substantially more feasible by increasing speed and cutting costs.