If you’ve gone to the trouble of creating a fictional island with lots of zombies, you might as well make use of it. Deep Silver is doing so with the launch of Escape Dead Island, the latest game in its zombie-killing series.

While past Dead Island games were first-person zombie combat games, this is a third-person survival mystery single-player game. This new effort uses a different comic-style art — it’s similar to The Walking Dead episodic game series from Telltale Games. This is in contrast to the more realistic 3D graphics of Dead Island. It debuts on the PlayStation 3, Xbox 360, and PC this fall.

Meanwhile, Deep Silver plans to launch Dead Island 2 in the spring of 2015 on the PlayStation 4, Xbox One, and PC. So yes, it seems like Deep Silver has the island covered.

Deep Silver is a German game publishing company that has come a long way since 2011, when the original Dead Island shipped. Back then, it had never shipped a game that sold more than 500,000 copies, it was the No. 30 publisher in the U.S. on all formats, and it had no internal developers. Now, it has shipped five titles that have sold more than 1 million copies, and it is a top-10 publisher in the U.S. on the Xbox 360 and the PC. It has two internal developers. The company farmed out this title to Swedish studio Fatshark, which worked on games like War of the Roses, and action title.

The new title features a character named Cliff Calo, the son of a wealthy media empire mogul. He has a chip on his shoulder and has a lot to prove. So he journeys to the island of Banoi, after hearing about the gruesome events that took place in the original zombie-infested Dead Island. His aim is to discover the origins of the virus. Stealth is a must, as there are parts in the game when the player is vulnerable.

Deep Silver describes the art as a “comic-vignette” style, and it says the title has a story-driven plot which pits players against their own psyche as they try to escape the island and its horrors. It was written by Emmy winner Anne Toole. Fans who buy the game from GameStop will have exclusive access to the Dead Island 2 beta event next year, and GameStop Rewards members will be automatically entered into the July Epic Reward promotion. One winner will get a trip to Berlin, where they will be scanned into the game as an in-game zombie character for Dead Island 2.

The game will sell for $40, in contrast to the usual $60 price for the newest games on the PlayStation 4 and Xbox One. That strategy is interesting, but Deep Silver is no doubt well aware that the fanbase of the older consoles is far higher than the next-generation machines, and that means it’s still worth developing games for the last generation.

Of course, Deep Silver doesn’t want to get stuck, creatively, on this island. And that’s why it is co-publishing games like Homefront: The Revolution, with Crytek, and it is spreading out to other games even as it doubles down on Dead Island. 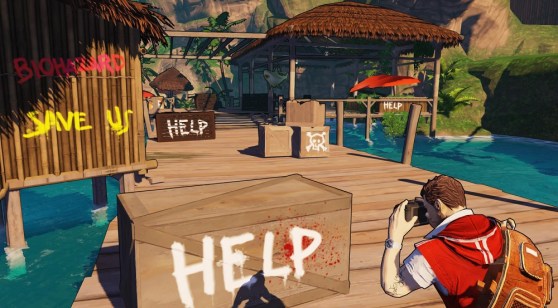