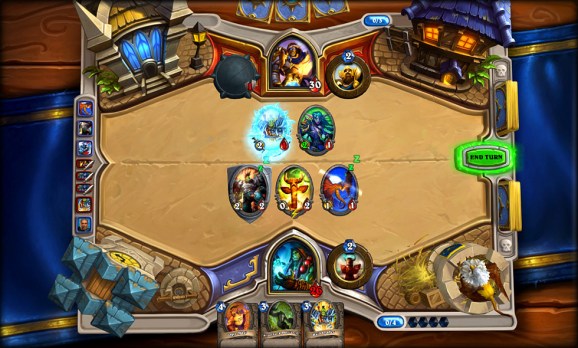 A typical match in Hearthstone.

After causing a controversy, an international e-sports league is changing its rules to welcome women players after having discussions with one of competitive gaming’s most-important publishers.

The International E-sports Federation (IESF) is ending its policy that prohibits women from competing against men in pro-gaming competitions, according to a post on its website. Earlier today, the Finnish Assembly Summer 2014 e-sports tournament came under fire from critics when people learned that women could not enter a number of its competitions. The Finnish league explained it was making its rules in accordance with the South Korean-based IESF. That governing body originally decided to segregate men and women because it is trying to get e-sports into the Olympics, which has very few gender-integrated events.

“The IESF has listened to the gaming community and has carefully considered their opinions,” reads the notice. “Upon hearing these concerns, the IESF convoked an emergency session of the IESF Board to respond.”

We reached out to Hearthstone developer Blizzard earlier today, and the company made it clear that it was not happy with the IESF’s policy.

“One of our goals with e-sports is to ensure that there’s a vibrant and also inclusive community around our games,” a Blizzard spokesperson said in a statement provided to GamesBeat. “We do not allow the use of our games in tournaments that do not support this, and are working with our partners to ensure they share the same goal.”

Blizzard told GamesBeat that it was in touch with the IESF and that it understood the organization would change its rules. Soon after that, the IESF posted the policy change to its website.

If you’re wondering why the IESF still has women-only events if it is trying to stamp out gender discrimination, the organization explained that it wants to provide extra opportunities for women.

“Female gamers make up half the world’s population, but only a small percentage of e-sports competitors are women,” reads IESF’s note. “The IESF’s female-only competitions aim to bring more diversity to competitive play by improving the representation of women at these events. Without efforts to improve representation, e-sports can’t achieve true gender equality.”