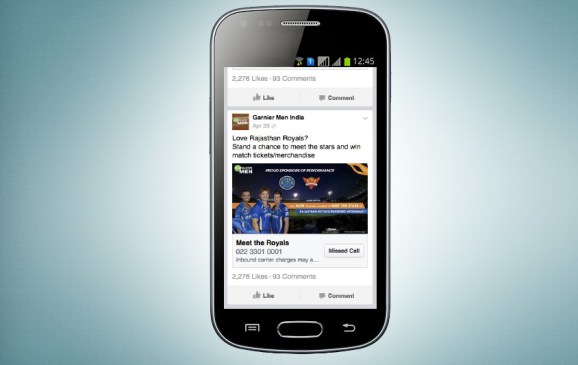 Because voice calls and data plans are expensive in India, people regularly call and hang up to communicate with their friends and family. Depending on the context, a missed call could relay messages like “I’m outside” or “call me back.”

Now Facebook has introduced a way for companies to cater to that practice, it announced in a blog post today.

The social media company is testing a “missed call” ad unit, which automatically places a “missed call” to an advertiser when clicked. In return, those companies will send back content like music, cricket scores, or celebrity messages — alongside a brand pitch — without using minutes or data, Facebook explained. Cosmetics maker Garnier is an early program participant.

Facebook has more than 100 million users in India, and 66 percent of those folks access the social network primarily through a feature phone, not a smartphone, according to the company. Facebook’s 69 million strong Indonesian userbase is similar: 71 percent access Facebook through basic mobile devices.