Android tablet owners pining for Microsoft Office can afford to crack a smile of anticipation as a purpose built version encompassing Word, Excel, and PowerPoint should arrive later this year.

“Our goal continues to be to delight users wherever they are and on whatever device they are using by giving them the full power of native Office apps,” so said incoming Microsoft CEO Satya Nadella in a blog post entitled “A cloud for everyone, on every device” back in March.

Now, The Verge is reporting that Microsoft is seeking help for a private beta test of the Office for Android tablets application. Interested parties can register for a chance to get their hands on a pre-release version at Microsoft’s SharePoint website.

It’s likely to be a touch-optimized version with a similar freemium model as the iPad Office suite of apps. That means users can review documents for free, but they have to subscribe to Office 365 to unlock the ability to edit or create them.

When the Microsoft Office suite landed on the iPad, just over three months ago, the Microsoft Word app hit number one in the App Store chart for free apps within 12 hours, with Excel and PowerPoint hot on its heels. 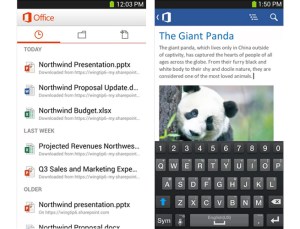 Above: Microsoft Office for Android

Google is planning to pull its free Quickoffice app, although its own Drive suite of Docs, Sheets, and Slides apps will continue to support Microsoft Office file formats, and they’re all cloud-connected and free.

Apple moved last year to offer its iWork suite including Pages, Numbers, and Keynote for Mac and iOS devices for free.

Microsoft will be hoping that the traditional market-leading popularity of its Office suite and a depth of options will be enough to help it compete and persuade people to subscribe. There is already a Microsoft Office Mobile app for Android smartphones.