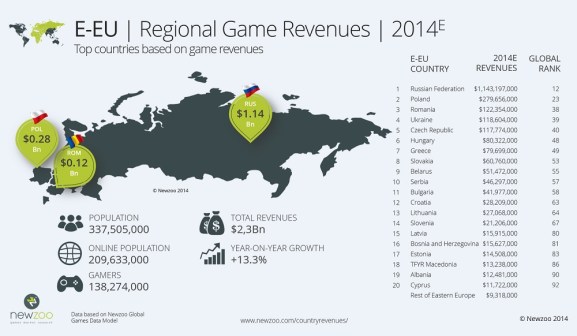 The Russian game market has been tagged as “emerging” for a long time. But figures show that it has arrived and is bigger than most realize, with $2.3 billion in total Eastern European regional revenues this year, according to a new report by market researcher Newzoo.

Above: Warface on the Xbox 360

Game revenues in the region are expected to rise 13.3 percent in 2014. And the Russian Federation’s revenues are expected to be $1.14 billion in 2014, placing it 12th among countries worldwide. Poland is No. 23 with $279.6 million in revenues, followed by Romania at $122.3 million, Ukraine at $118.6 million, and the Czech Republic at $117.8 million, according to Newzoo. Such revenues place Eastern Europe as a big part of the global games business.

Newzoo CEO Peter Warman said that “submerged” is a better term for the market, as it is like an iceberg with a lot of bulk hidden below the surface. It’s worth noting that Crytek’s Warface free-to-play online shooter game has become successful and profitable in Russia, where the game is one of the top-grossing titles. It was beta tested and released in the former Soviet Union on its launch day.

Warman said that outsiders have misunderstood the complex market. Russia is the largest country by territory in the world, almost double the size of the U.S. and Canada. It spans nine time zones and shares borders with Eastern and Western countries, making for a lot of diversity. Eastern Europe has a relatively high Internet penetration of 62 percent, or 209.6 million online users out of a population of 337.5 million. The online population includes 138.3 million gamers. In Russia, the number of gamers is 61.8 million, ranking it fifth in raw numbers.

“I find the Russian games market to be as intriguing as that of China,” Warman said. “There are actually several striking similarities between the two, making Russia an even more attractive market as gateway to the East. Hard market data and a deeper cultural understanding of the market reveals that Russia deserves to be valued as a primary games market, in many cases boasting more potential than the default route of localizing a game into German, French, or Spanish.”

While there are about 140 million Spanish-speaking gamers compared to 67 million Russian-speaking gamers, the gap is smaller when you focus on paying gamers, Newzoo found. That’s important as game developers decide where to localize their games. Russian gamers are big fans of PC massively multiplayer online games, where that market has the potential to become an even bigger market than Germany. Yet many Russians are dissatisfied with the slowness of how games are localized to their market.

Local businesses like Mail.ru, a rival to Gmail, control the majority of web and social media. And Russia is often a good stepping stone to the Chinese games market, Newzoo said. Piracy has been reduced to the fast growth of free-to-play games in Russia.

Console games on the TV are largely ignored in Russia, with only 32 percent of all gamers playing that way. But about 66 percent of Russian gamers play on tablets and mobile devices. Oddly, Russia was one of the few countries in the world where King’s Candy Crush Saga was not one of the top 10 grossing mobile games in 2013.