The coin-op arcade classic Q*bert is finally making a comeback. Galaxy Pest Control Games and Sideline Amusements have announced that they are releasing Q*bert Classic on Valve’s Steam digital distribution platform on the PC today. Mobile, tablet, and console versions will follow.

The title is part of a wave of retro gaming that has emerged as hardcore gamers get older and keep playing. Older arcade fans will remember the goofy game from 1982, when D. Gottlieb & Co. introduced it. Although it debuted during a big video game industry crash, Q*bert went on to become one of the most successful arcade games of all time, inspiring home console versions, Q*bert merchandise, and an animated TV show. The title could release a lot of pent-up nostalgia as Q*bert has been off the market since the 1990s.

The $5 Steam version is a remake of the isometric platform-puzzle game featuring the grawlix-spouting hero. The game includes a pixel-perfect, classic 2D version and a reimagined Q*bert Rebooted version with 3D graphics and additional characters. Both titles are twitch games that require puzzle-solving skills and logic.

“With renewed interest in Q*bert, in part due to the cameo in the recent Wreck-It Ralph animated feature film, we are delighted to reintroduce the game and characters to current fans as well as a new generation of gamers who are experiencing Q*bert for the first time,” said Mark Caplan, a vice president at Sony Pictures Entertainment, which owns the Q*bert license. 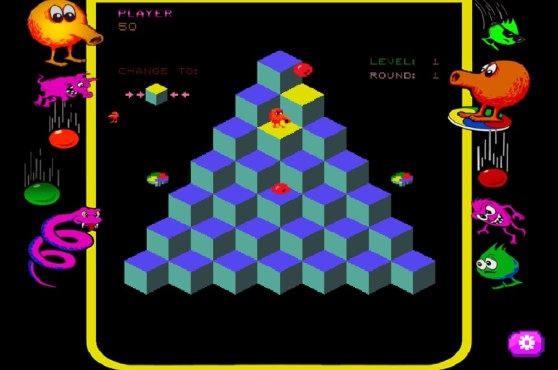 The classic game is revamped for the modern PC with mouse and Steam gamepad controls. Gonzo Games and Sideline Amusements co-developed the title.

The title character Q*bert jumps around an isometric cube pyramid to convert each block’s color while avoiding adversaries such as Coily, Ugg, and Red Ball. The levels become progressively harder with more enemies blocking your path and the tiles requiring multiple jumps to change to the required color.

The Q*bert Rebooted game uses hexagonal blocks instead of squares. It has new enemies, playable characters, power-ups, traps, gem-collecting, and new ways to play. The seven new playable characters are Q*zard, Q*bertha, Q*bot, Q*zilla, Q*tee, Q*knight, and Q*nicorn, all based on the original Q*bert form. Three new enemies include Homer, Uppercut, and Treasure Chest. And there are 10 new achievements.

“There are plenty of good new games out there, but there is a certain nostalgic affection for and plenty of playability in some of the old classic games,” said Jamie Ottilie, the co-founder and CEO of Galaxy Pest Control. ”Robert van Gool, the president and CEO of Gonzo Games, and I got together a couple of years ago and realized we had a shared vision of bringing one of the best of these – Q*bert – to today’s most popular platforms and introduce it to a new generation of gamers. We have a chance to pay homage to the original title while expanding it in some new directions.”

Founded in 2010 and based in Malibu, Calif., Galaxy Pest Control is a social- and mobile-games development studio with industry veterans on a mission to bring high-resolution graphics, top-shelf music, and triple-A production values to next generation mobile and tablet platforms. Sideline Amusements, a division of GPC Games, was founded to create fun and meaningful gameplay experiences for the casual audience. The studio’s first title, an irreverent look at American politics, was called Mad Humans Election 2012.

“Jamie and I envisioned there would be a renewed interest in the classic games with which we grew up — and that it would be about more than nostalgia since these games have enduring charm and great play mechanics,” said van Gool. “Titles such as Q*bert started it all, inspiring today’s game creators. It seems only reasonable that its intuitive and addictive gameplay would appeal to today’s increasingly diverse and multigenerational audience. From what we saw at this year’s [Electronic Entertainment Expo], I think we were right.”

The original Q*bert was conceived by Warren Davis and Jeff Lee. The title was Gottlieb’s only video game that gathered huge critical and commercial success, selling around 25,000 arcade cabinets. Cabaret and cocktail versions of the game were later produced. The machines have since become collector’s items; the rarest of them are the cocktail versions.

The next platforms coming are Apple iOS and Google Android, followed by console platforms. Q*bert is built in Unity. 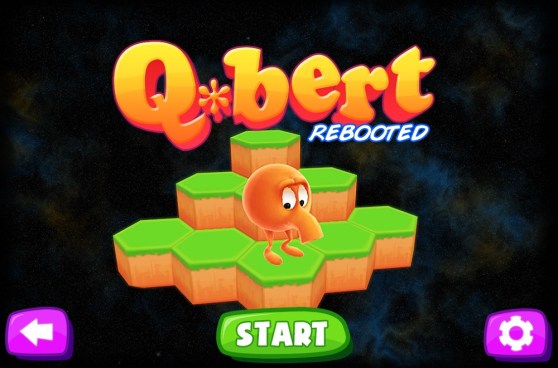 Q*bert saw something of a mini revival in recent years. The game enjoyed a short cameo in the documentary The King of Kong, which was a film about the top Donkey Kong arcade game players. The film included a segment on Doris Self, an older player who made video game history when, at the age of 58, she became the champion of Q*bert, scoring a record 1,112,300 points in the game in 1984. She competed in tournaments against other Q*bert fans but tragically died after a car accident in 2006.

Then, a new generation was recently introduced to Q*bert when the character appeared in last year’s Wreck-It Ralph movie, which came out in the fall of 2012 and featured a Q*bert scene. Malibu, Calif.-based Galaxy Pest Control was formed in 2010, and it has 15 employees. San Francisco-based Gonzo Games, founded in 2008, has 12 employees. Both companies are bootstrapped. 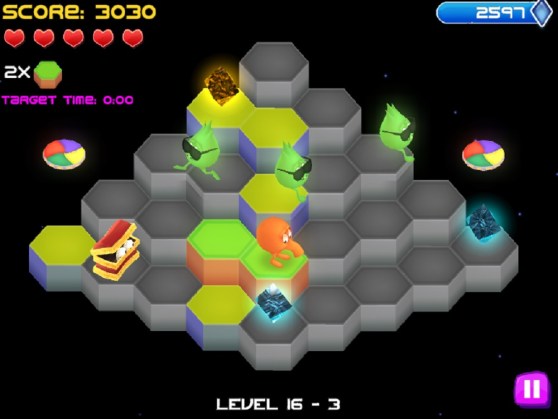