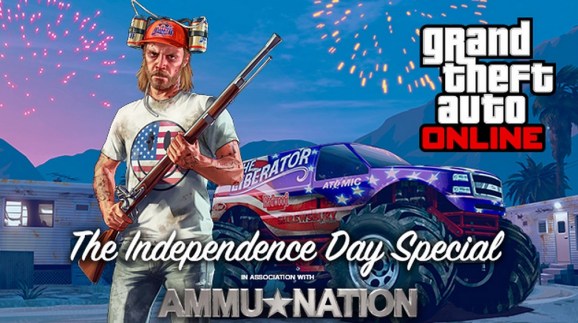 It’s time to get out your shotgun and scare the neighbors in your trailer park.

At least, that’s the impression I get from the new images for Fourth of July content in Rockstar’s Grand Theft Auto Online multiplayer world. Game makers are dusting off the patriotism to deliver Fourth of July-themed content in the hopes of grabbing some of your time during a slow holiday week in the U.S.

Today, Rockstar announced its Independence Day Special, the latest update to Grand Theft Auto Online with two new vehicles, the Musket weapon, seven new properties spread across Los Santos and Blaine County, new fireworks and new rides on Pleasure Pier. Stuff like this might seem trivial or not worth the effort. But the name of the game these days is retention, or keeping players engaged with your product. That leads to a longer lifecycle for a game and greater opportunities to share its content with friends. And in the long run, that leads to more spending in a game with microtransactions.

So it’s no accident that Activision Publishing is also releasing its Call of Duty: Ghosts Invasion multiplayer map pack on July 3. The new downloadable content (DLC) for Call of Duty: Ghosts isn’t specifically themed for the Fourth, but it is clearly timed to take advantage of the long weekend. It includes four new multiplayer maps including “Departed,” set in a Mexican town during the Dia de los Muertos (Day of the Dead) celebration; the “Pharoah” map on the site of an ancient Egyptian palace; “Mutiny” on a remote Caribbean island; and “Favela,” a return to a fan-favorite map from Call of Duty: Modern Warfare. The DLC pack costs $15 on an a la carte basis.

Rockstar’s content will expire sometime in mid-July, so get your new stuff now. It will include the ability to place and set off fireworks, so you can create your own shows, and you can do it with nationalistic pride with shirts with “Made in the U.S.A.” on them.

Ubisoft also released some new missions for its Watch Dogs open world hacking game. Ubisoft doesn’t have a Fourth of July theme, but, then again, it’s a French company.

On the mobile side, Happy Giant launched its Ninja Time Pirates game this week with the Fourth of July in mind. The title lets you relive the big moments in U.S. history — like Paul Revere’s midnight ride — in a zany way. The app highlights characters like George Washington and Ben Franklin, and it allows you to travel to places like colonial New England.

No doubt there will be more promotional content coming in the next few days.