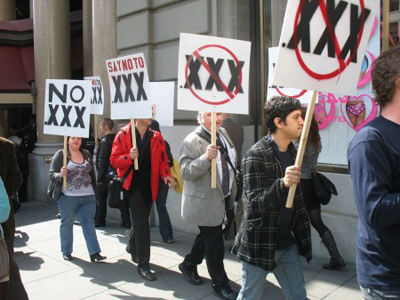 If you’re the operator of a sexually-explicit website and you haven’t been investing your dollars in SEO, we’ve got some bad news: Google has decided to stop carrying ads in its massive AdWords network, according to a report by CNBC’s Chris Morris.

The change of policy, which was announced back in March, is now being communicated via email to advertisers who might potentially be affected by its implementation. According to CNBC, one advertiser received the following from Google:

When we make this change, Google will disapprove all ads and sites that are identified as being in violation of our revised policy. Our system identified your account as potentially affected by this policy change. We ask that you make any necessary changes to your ads and sites to comply so that your campaigns can continue to run.

This would seem to indicate that while Google will not ban adult sites from running ads, the explicit nature of the ads themselves must be altered if they are to meet the new terms of Google’s AdWords policy.

If however, adult sites are, ahem, offended by Google’s change of policy, they can always sign on with Bing. Microsoft’s search engine might only serve up a paltry 18 percent of overall search traffic compared to Google’s 67 percent, but they do have a program just for adult advertisers who can’t find any love though conventional advertising techniques.