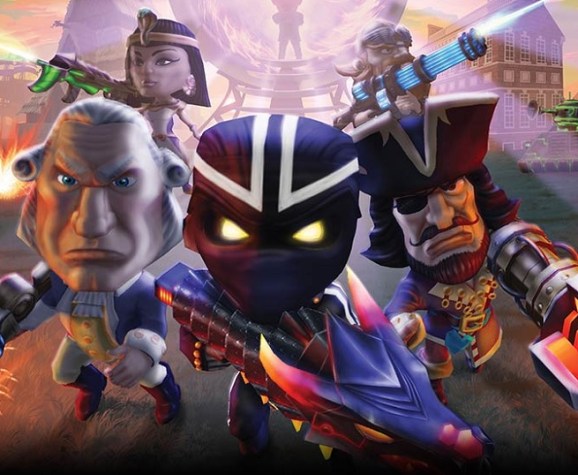 If you’re in the mood for Independence Day, you can play HappyGiant‘s Ninja Time Pirates and step back in time. In the game, you can travel back to Colonial Boston and relive events like Paul Revere’s Midnight Ride and The Shot Heard Round the World.

This fuses history and science into an action game on iOS and Android (and it’s on Steam Greenlight). HappyGiant just launched its multiplayer version of Ninja Time Pirates just in time for the Fourth of July. The update was timed so that players can enjoy the game over the long holiday weekend.

“It’s all very silly, but you do learn historical facts along the way,” said Michael Levine, the founder of HappyGiant in Boston. “You can fight alongside Ben Franklin, George Washington, and Paul Revere. You change history and battle aliens along the way.”

Players jump through parallel universes, setting up a Time Base that you can defend, and you can raid other players. The Unity-based 3D game has a lot of backstory to it, since Levine can’t get away from his roots as a story-based game maker at LucasArts. Other parts of the game take you back to Ancient Egypt, the Viking era, the Philadelphia Experiment, and Roswell. Other “time guardians” still in the works include historical characters like Shaka Zulu and Abe Lincoln.

“We focused on the kids market before, and this idea has been brewing for about five years,” Levine said. “It’s like X-Files meets Bill and Ted’s Excellent Adventure. It has all these conspiracies in there and we make it incredibly ridiculous and lots of fun.”

HappyGiant got started about three years ago and it has made about seven games, some for other companies. Levine said that the game will roll out on more platforms over time. HappyGiant has 15 employees, and it was started by veterans of LucasArts, ILM, and Activision. They worked on games like Full Throttle, the Secret of Monkey Island, and Sam and Max.

“We all work with the old-school guys,” Levine said.