Modern games brainwash players into thinking that headshots are the sexiest way to show off their shooter prowess, but nothing is more impressive than avoiding the meaty legs and torso to plant a bullet right in your enemy’s Cradle of Life.

Blue Estate is here to carry the banner for the comedic, over-the-top shooters that twentysomethings and thirtysomethings grew up with.

Blue Estate is based on Viktor Kalvachev’s comic book series of the same name. It follows the exploits of a nerdy private detective named Roy Devine Jr. and his experiences with the Luciano crime family. Players control the Luciano boss’s hot-headed son, Tony, and Navy SEAL-turned-mobster-cleanup-man Clarence. Blue Estate takes place in a stylized Hollywood that is one-part ’30s detective drama and one-part Pulp Fiction.

Both the comic book series and the game count Kalvachev as the writer and director; and they are one multimedia canon. It comes from Kalvachev’s new indie studio, HeSaw Games, and Focus Interactive released it for the PlayStation 4 on June 24.

Someone finally had the good sense to bring back Time Crisis

The first sentence of many Blue Estate descriptions uses the phrase “on-rails shooter.” I am sure I will be berated in the comment section for this, but I had no idea what that meant.

I loaded up the game and got my answer within seconds: Time Crisis. On-rails shooter means Time Crisis. Why don’t they just say Time Crisis?

Don’t get me wrong. Blue Estate is nothing like Time Crisis in every other respect. But let’s not kid ourselves. Most gamers over 20 are going to think one thing when they realize that their character walks on his own and pops out from cover to shoot waves of bad guys with flashing indicators on their chests. I think I even yelled “ACTION” the first few times my character moved into his shooting spot.

The strange choice works. I haven’t played an on-rails shooter in ages, and I was rusty. I had to relearn everything, which gave me a sense of nostalgia and discovery when playing through Blue Estate. 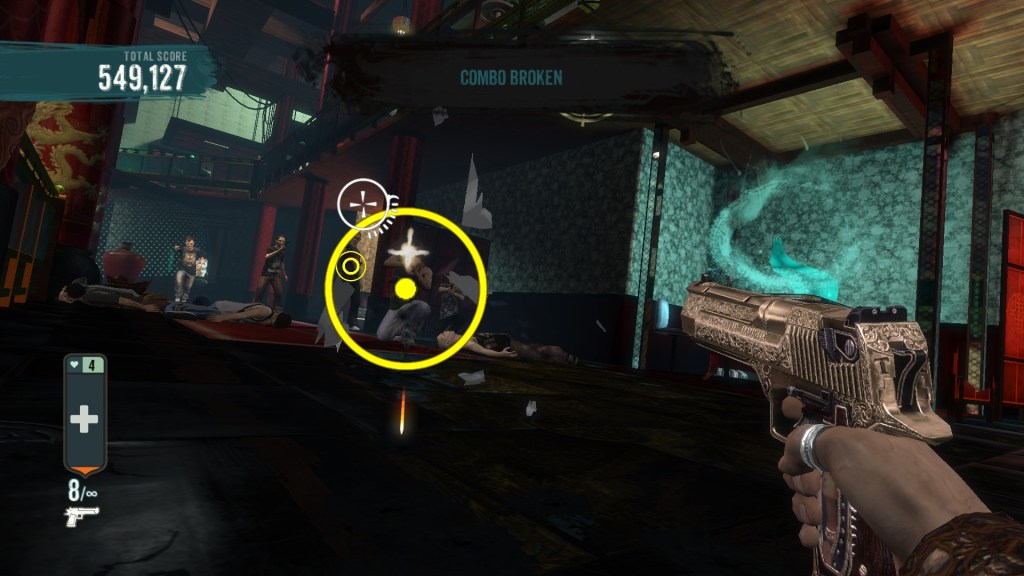 Holy s*$%, my fancy PS4 controller doubles as a Wiimote

Who knew about this and didn’t tell me?!

Blue Estate doesn’t use the D-pad or any control sticks. Players move the controller itself to aim their weapons. I had no idea the DualShock 4 controllers had “gyroscopic features,” as Kalvachev puts it in his PlayStation Blog announcement.

The sensors require constant re-centering. If you move the controller to far to the left, it is impossible to move to the right of the screen without bending your arms in an unnatural way. Luckily, HeSaw put in two centering buttons (Up on the D-pad and L1) that enable players to re-position the targeting reticule in the middle of the screen. It takes a little practice to get used to constantly pressing these buttons and adjusting, but it works.

Blue Estate appeals to the type of humor barely acceptable by today’s social standards. People with sensitivities to social issues might want to flip off that switch before firing up this game.

Whether it’s sending Clarence—the game’s only black character—on a mission in a fried chicken restaurant, Tony exclaiming that the fog in one mission’s graveyard setting is “thicker than my mama’s ragu,” or the countless sexual stereotypes (I believe every female character in the game is in lingerie or nude), Blue Estate has something to offend everyone.

There aren’t any jokes in Blue Estate that you wouldn’t find in South Park or Family Guy. The jokes are offensive, but they will get a few reluctant chuckles from the game’s target audience of adult males addicted to pop culture.

Blue Estate also delivers a much older brand (and better) of comedy: The slapstick pitfalls. Each level features about two or three comic missteps by the bumbling mobsters. Here is an example:

The type of hyper-violence that inspires legislation in Australia

Australia’s government seems to rise up in protest every time a new Grand Theft Auto hits the market, which leads me to believe that the country’s leaders are really going to hate Blue Estate.

In fact, I could see a lot of countries banning it.

Blue Estate delivers cartoon violence with an intensity that would make Duke Nukem blush. The game only lasts about four or five hours, but that is more than enough time to shoot, bludgeon, explode, and maim thousands of mindless gangsters.

These waves and waves of cannon fodder get a little tedious. Blue Estate has a pretty solid storyline, but it does use the old-school formula of clearing room after room of enemies until you run out of rooms.

I am an American. Some of us revel in gun violence. But at 25, I need a little bit more out of my gameplay. Luckily, Blue Estate had an answer for me.

These are the best quick-time actions I have ever seen

Blue Estate masterfully breaks up the waves of violence with hilarious cutscenes and quick-time actions.

These tasks range from the mundane, such as opening a door … 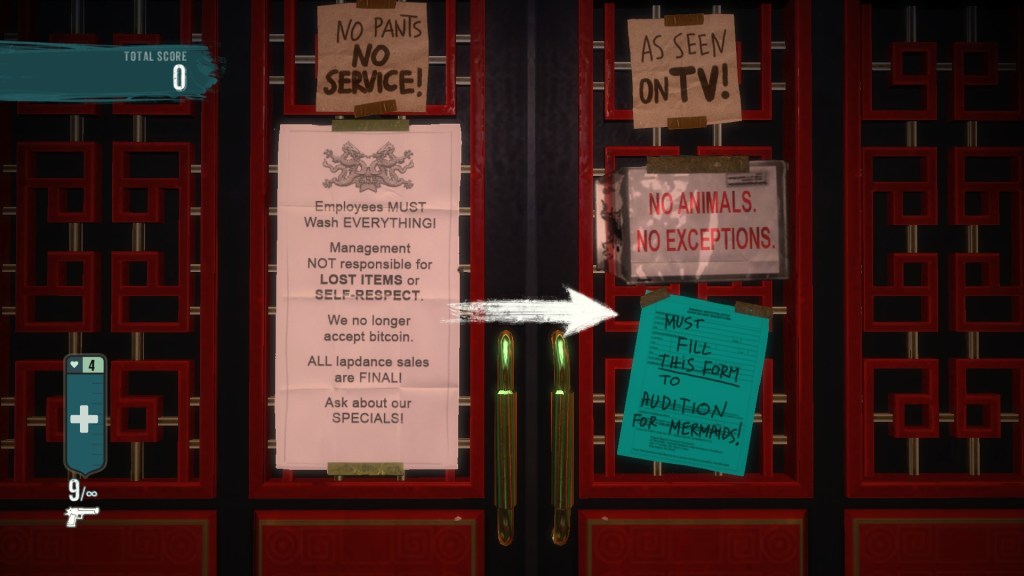 Above: The Twin Dragons stole Tony’s girl, and they don’t accept Bitcoin.

… to the funny and strangely realistic, such as Tony constantly needing to fix his hair during intense gunfights: 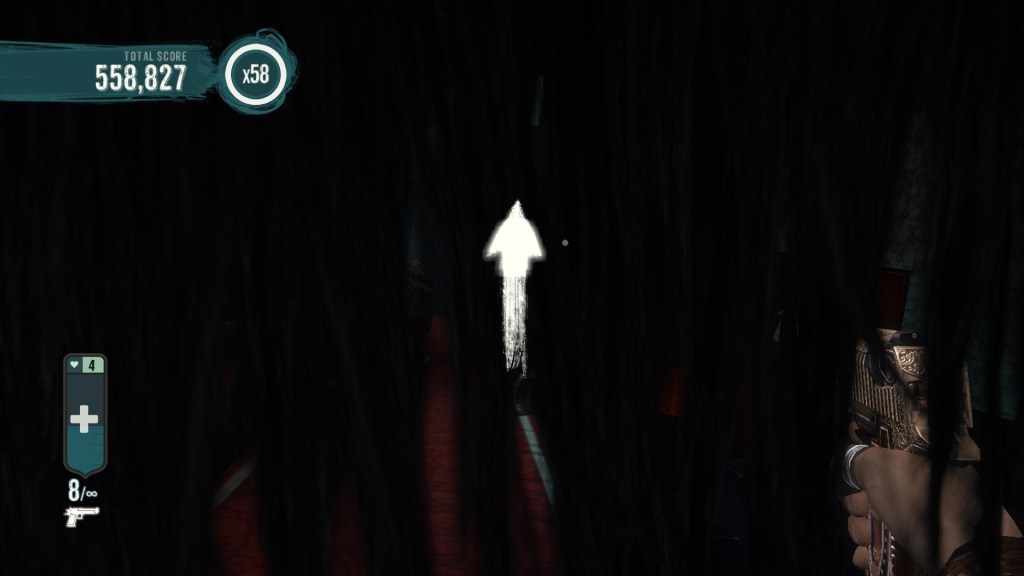 Above: Players must swipe up on the touchpad to fix Tony’s hair.

These rapid-fire touchpad prompts keep players guessing just enough to liven up the stale waves of violence. Some of them even result in humorous cutscenes that typically involve Tony falling on his ass.

Occasionally, an omnipotent government agency will randomly chime in with some background information or commentary: 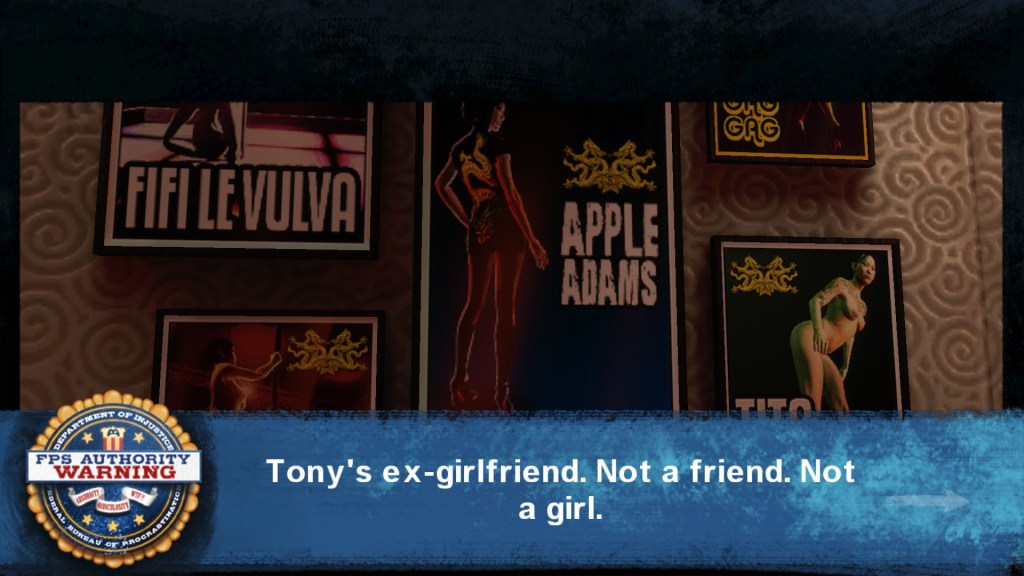 Above: Tony’s violent life had its share of mistakes.

These features change Blue Estate’s tempo. Some speed the game up, while others slow it down. This keeps the game fresh and interesting to players that would otherwise be bored out of their minds emptying clip after clip into no-name minions.