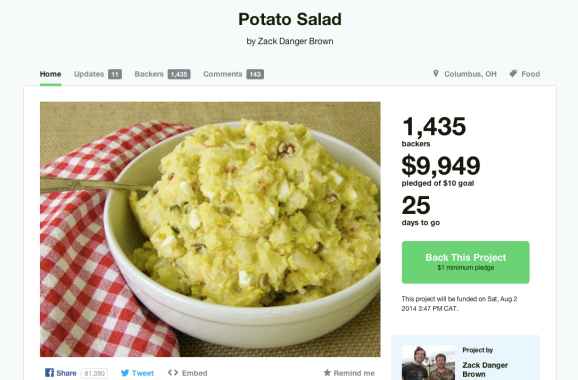 On July 3, Zack Brown created a Kickstarter project to fund a $10 bowl of potato salad. The project took off, and has now raised $10,000 to date.

Lighthearted Kickstarter projects have gone viral before, but this project arrives at an interesting time: exactly one month after Kickstarter opened the floodgates and stopped reviewing most campaigns manually.

At the time, a Kickstarter spokesperson insisted that quality would not suffer as a result of the change. “We’ll continue to actively govern the site with thought and care,” the spokesperson told us. “Projects will be reviewed by a sophisticated algorithm we developed that looks at thousands of data points.”

And then this happened.

To Kickstarter’s credit, the firm responded in the absolute best way possible:

Thanks for reaching out.

There’s no single recipe for inspiration.