When Daymond John and his friends started the clothing line FUBU, the name was an acronym that stood for “For Us By Us.” Using that convention, one of his latest ventures may be known as “FEBE” — For Executives By Everyone.

In reality, John’s entry into the crowded line of mobile accessories aimed squarely at professionals is called Moguls Mobile. In addition to twisting tongues a bit, it puts a twist on crowdsourcing that stands in contrast to models from Kickstarter and Quirky.

Many of the products in the Moguls Mobile line will be familiar to anyone who has visited the mobile accessory section at Best Buy or Amazon. The offerings include a cylindrical battery pack, a charging case for the Samsung Galaxy S4, and screen protectors. And the product line emphasizes productivity over entertainment, as evidenced by a small, bulbous Bluetooth speaker, branded as a speakerphone, even though other phones already sport such functionality. 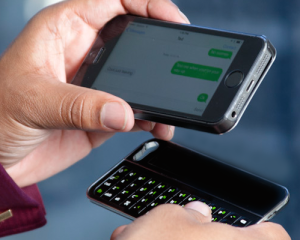 Above: The Magneti bluetooth iPhone keyboard

But the line does offer a few items that haven’t seen mass penetration. One is a Bluetooth keyboard for the iPhone that attaches to the device via magnets called Magneti. (John said he misses the typing experience from the days we all carried BlackBerrys).

Another is a lost and found tag service. If an item is found with the service’s sticker on it, the finder calls a phone number and a courier picks up the item and delivers it to the owner. John notes that in early private tests, 80 percent of lost items have been returned. Despite the focus on professionals, most of the products are priced competitively.

The new outfit is likely inspired by John’s Shark Tank experience (he was one of the original entrepreneur judges, or “Sharks”). The real novelty with Moguls Mobile, though, is how it plans to leverage crowdsourcing. The brand is partnering with Edison Nation, a company that, like Quirky, solicits ideas from inventors and takes those ideas through a process to get them onto retail shelves.

However, unlike with Quirky, where the submission, selection, and development process are out in the open, the Edison Nation process takes place privately between the company and the inventor. In addition, while Quirky is building its own brand, Edison Nation is focused on licensing inventions. Moguls Mobile has set aside $5 million to attract ideas for additions to its line. Anyone can submit an idea right on the Web site.

Also unlike Quirky, which solicits suggestions across a huge range of product categories (although it has run themed suggestion contests), Moguls Mobile product ideas must be specific to a line that targets mobile professionals. Don’t look for any “Hello Kitty”-branded merchandise, said John.

The crowdsourced component of the business poses a challenge for John on the branding front, as putting out a broad call for products could result in suggestions that are difficult to market as a cohesive product family. John accepts this, agreeing that these are still early days for the venture and saying he’s willing to learn where there might be unmet needs for customers beyond his current view.

Competing with the likes of Logitech, Belkin, Speck, and 3D-printed iPhone cases is a daunting enough challenge without the distraction of poring through heaps of product suggestions.

But if John, who began FUBU sewing hats, can stitch together the best suggestions from the crowd into a tightly focused product line, he may see some success here.