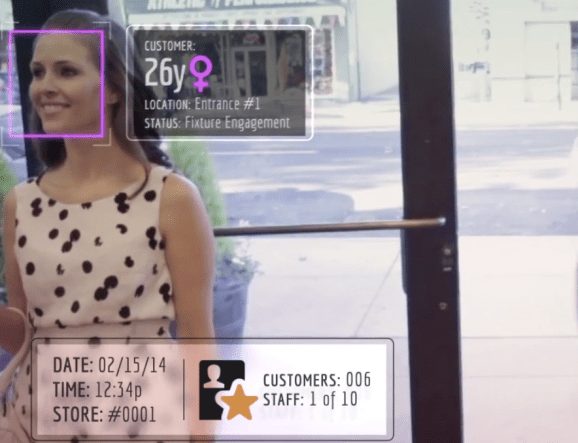 A RetailNext marketing video shows a visualization of how retailers can identify and track likely shoppers.

RetailNext, a company that specializes in providing data analysis tools to real-world retailers, has raised a $30 million late-stage round of investment.

This is the company’s fourth round of funding, bringing its total capital raised to $59.4 million.

The company says that it provides e-commerce-style metrics for brick-and-mortar stores using sensors that track the physical activity of actual human shoppers. It counts 140 companies in 40 different countries as its customers, and says it is adding 400 to 1,000 new stores to its analysis every month. So far it has installed 65,000 sensors around the world, which it claims enable it to track over 1 billion human shoppers every year.

The sensors include video cameras, point-of-sale systems, payment cards, weather sensors, and even guest Wi-Fi networks. So the next time you log into that coffee bar’s free Wi-Fi, just remember: It may be logging your presence in order to help the shop figure out how to sell you more lattes.

The company plans to use its new funds for product development, R&D, and to expand its operations in Europe, the Asia/Pacific region, Latin America, and other emerging markets.

RetailNext is based in San Jose, Calif.

Wouldn’t It Be Nice to Know Your Shopper? from RetailNext on Vimeo.