Bilbao, Spain-based WiMi5 wants to make game publishing easier for new developers. Its platform allows developers to create games in the HTML5 format, or the lingua franca of the web, so that the games can run on just about any platform.

The platform allows developers and brands to create, publish, and monetize HTML5 games. It reduces the time it takes to design and publish casual games, and the company says that no prior programming knowledge is required for someone to do so. The WiMi5 game editor is designed for both beginners and experienced developers.

The games will run on any web browser or mobile device including iOS, Android, Windows Phone, or Firefox OS. Right now, the WiMi5 game platform is available online for free.

“We are democratizing the creation of cross-platform casual games by unlocking the potential of HTML5 to be the foundation of web-based gaming. WiMi5 takes casual game design to the next level, making it even simpler for designers to build a game, publish it across multiple sites and create a potential revenue channel in three easy steps,” said Raúl Otaolea, CEO, WiMi5, in a statement. “Our team has been working on HTML5 design for years, we wanted to create a tool that would make it easy for independent developers and brands to create elegant, fun and consistent casual game content for rapidly growing web and mobile audiences.”

Otaolea added, “The web is the next game platform.”

Using the game editor, developers can upload backgrounds, graphics, and sounds from a library to create custom games, or choose from one of the available templates for a quick start. Developers can manage all game assets, behaviors and animations via the scene editor. Then using the logic editor, the developer can arrange sequence, game flow and resources. It’s a simple drag-and-drop process to building games without coding knowledge.

The cloud-based platform allows developers to access assets that are available online and hosted on WiMi5’s cloud. The platform is free, but when a gamer buys a virtual good, the developer gets 70 percent of the revenue and WiMi5 gets 30 percent. 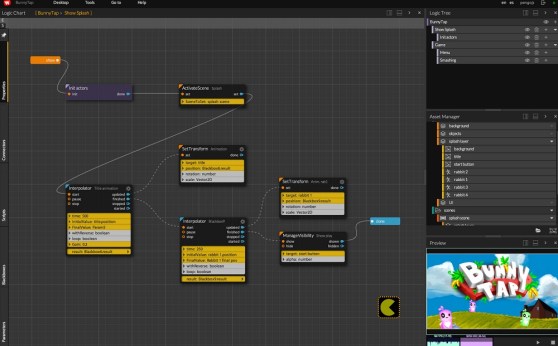 The company said more than 800 developers participated in its private beta test. WiMi5 is a spinoff from Tecnalia, the largest research and development center in southern Europe. The technology used by WiMi5 was developed in-house at Tecnalia over several years. WiMi5 was formally established in January and it has eight employees.

Rivals include Tresensa, Turbulenz, Goo Technologies, Play Canvas, and Ludei, as well as other HTML5 game platforms and publishers. Ludei converts HTML5 games into native apps. Tresensa also enables the creation, publication, and monetization of HTML5 games, but Otaolea at WiMi5 said that his company’s approach is very different.

“In our case, all services are seamlessly integrated so everything is very easy and visual,” he said. “At WiMi5 we are providing a complete visual editor for developers and non-developers where everything is done visually connecting elements without leaving the website. This is a huge difference in terms of cost and time, because we reduce the time to market drastically and allow even non-developers to use it.”

WiMi5 has a lot of low-level programming underneath its graphical user interface as well as backend service that access its cloud. That combination allows it to provide a bunch of different development and publishing services.

Investors include Carlos Blanco (Akamon and ITNet Group) and Tecnalia Research & Innovation. The company has raised 390,000 euros (roughly $530,000) to date.