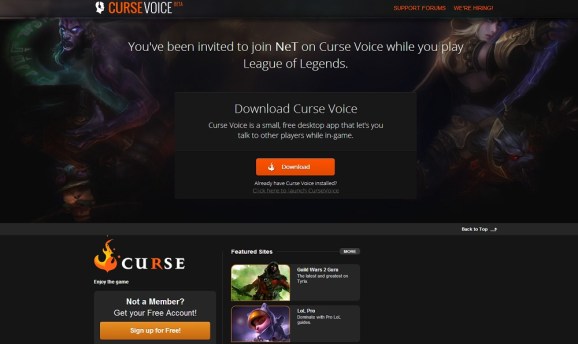 Curse, a popular online gaming services provider, raised $16 million both venture funding and debt in the wake of the launch of its Skype-like voice communications platform form online gamers.

The funding came after Curse announced that it got more than a million users in less than a week after the launch of the open beta test for its Curse Voice service. If it continues to grow at its current rate, Curse anticipates the service will hit 10 million active users by year’s end.

The Curse service offers voice-over-Internet protocol (VOIP) that can be embedded inside online games. When you have the Curse client open, you can simply click on a link. Curse will integrate the service into several major game titles, said Hubert Thieblot, Curse’s chief executive, in an earlier interview with GamesBeat. The popularity of the beta shows that gamers are hungry for new voice technology.

The Curse Voice app is proprietary, free-to-use software that works well with League of Legends, for instance. The software can automatically detect users of the same group and prompt them to connect to a voice chat session. It also has an extra layer of security. Other voice clients require users to share specific account credentials with other players. That can be cumbersome on a match-by-match basis, and it opens users up to security risks by making their Internet protocol addresses available. Curse Voice makes connecting more convenient and risk free.

The program automatically identifies teammates who are using the software and enables them to enter a voice session with the click of a button without ever revealing personally identifiable information.

Curse built the VOIP client over the past year because it felt like voice communication in games had stopped evolving. The whole company is based in Huntsville, Ala., and it has 120 people, but the voice app was built by five people.

Investors in the $10 million venture round include new investor GGV Capital. Curse also received a $6 million loan from Multiplier Capital, a venture debt fund. To date, Curse has raised $22 million.

“Curse is a high-growth company that is creative at using technology to build highly engaged gaming communities online. We are thrilled to be working with such a dynamic team that has the ability to both enhance how games are currently played and introduce more interactive alternatives,” said Hans Tung, managing partner, GGV Capital, in a statement.

Curse was founded in 2006, and it operates 45 game web sites with 28 million monthly unique visitors. It serves more than a billion page views a month.