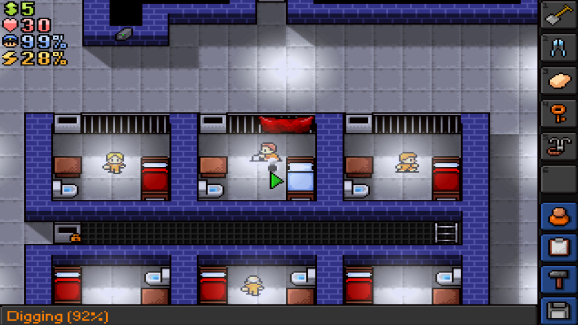 You can dig your way out of prison, but you'll need to dispose of the dirt. And stop your tunnel from collapsing.

The Great Escape, The Shawshank Redemption, Cool Hand Luke, Papillon. Yep, the prison break genre sure has produced some fantastic movies over the years.

But where are all the great prison break video games?

Surprisingly, the idea of planning and executing an escape from incarceration has been seriously underused in games, despite great potential for strategy, tension, and excitement. The last great prison break title I played was The Great Escape on ZX Spectrum, and that was way back in 1986.

Construction worker turned game developer Chris Davis, otherwise known as Mouldy Toof Studios, is aiming to buck that trend with The Escapists, which hits Steam Early Access this week. It drops you straight into a brutal, regimented prison environment — rendered in a deceptively-cute 8-bit style — and lets you craft and plot your way to the other side of the barbed wire fence, dealing with over-zealous guards and foul-mouthed inmates along the way.

What’s most amazing about the game is that Davis only set himself a Kickstarter target of $5,000 to pull it all together.

Above: The Great Escape: Was this the last great prison break game?

From construction site to game development

Until recently, you’d have found Davis constructing roofs for a living. That all changed in November 2012, though, when he raised over $10,000 on Kickstarter for his puzzle adventure game Spud’s Quest.

Davis had always made games as a kid, starting on paper and then dabbling with code on his ZX Spectrum. When he got his first PC he toyed around making basic games, but the success of Spud’s Quest turned development from a hobby into his main career.

I asked Davis if he had any tips for aspiring developers looking to make a similar switch.

“First off, have a decent half-original idea for a game and start drumming up interest for it right from the start,” he said. “Also, be prepared to live on peanuts for a while.”

Davis raised just over $12,000 from his Kickstarter campaign for The Escapists  — more than double what he asked for but still not a huge amount of money given the project’s ambition. “A lot of devs have families to support and need a full wage at the end of the week,” he explained. “I don’t fall into that class so I can manage working on a small budget for now and hopefully recoup it once the game sells.”

Playing the Escapists, it’s immediately clear that the game won’t hold your hand. And neither will the guards or fellow inmates.

I spent my first hour or so in the top-down prison getting beaten up, chastised for missing roll-call, caught holding contraband, and recovering in a hospital bed. It wasn’t until I wised up and realized I had to toe the line and keep my head down that I started having any success.

This is intentional, according to Davis.

“I grew up on games that didn’t hand everything to the player on a plate,” he said. “There was a big sense of achievement if you found out something yourself and [were] able to share it with friends. So, yeah, I don’t want to tell the player too much, just hint them along now and then.” 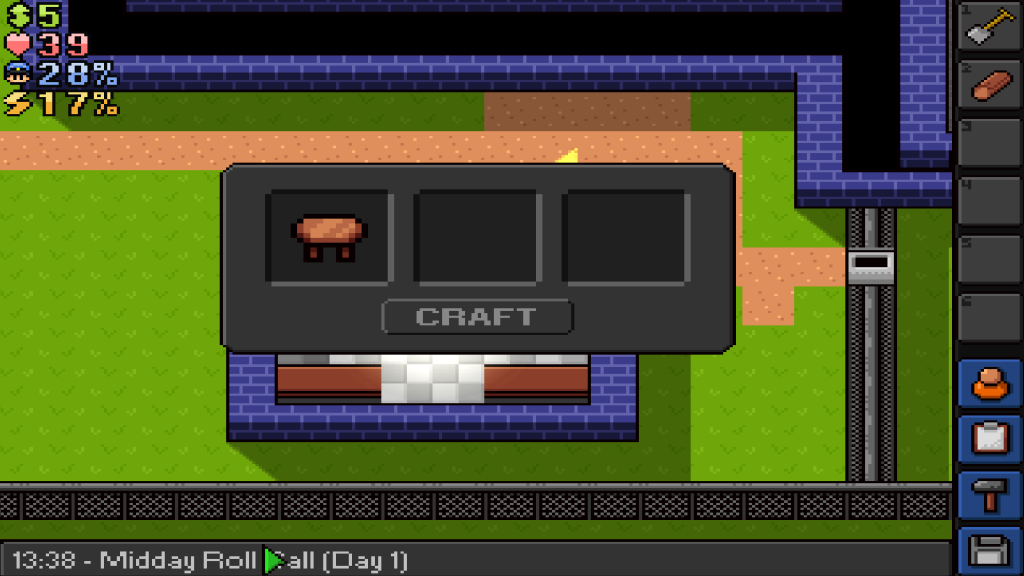 Above: Great for taking the weight off your feet after a long night digging.

There are currently over 100 items to find in The Escapist, some of which you can craft into important tools and weapons. I was personally pleased with the makeshift mace I created by combining a sock and a battery. It dramatically improved my chance of surviving a beating in the shower block.

Putting together the right combination of items is up to the player, but Davis has now added some collectible crafting notes which help out. “They’re a bit like a recipe and will explain how to craft some of the tools,” said Davis, “but [players] still might have to work a little to get them!”

Surviving your first days inside

Given the enormous shock of starting life behind bars, I asked Davis what tips he would give players to help them survive their first few in-game days.

“I’d say the first steps are spending a couple of game days buffing up in the gym to increase your strength stats and collecting money,” he told me.

You can earn cash in The Escapists by working prison jobs. At the moment, these are limited to woodwork, metalwork, and cleaning uniforms in the prison laundry. Davis has plans for a wider range of jobs in the final build, though, which should include janitorial duties, running the kitchen, emptying the trash, and taking charge of deliveries.

On top of earning you money, each job opens up access to certain parts of the prison along with the chance to grab yourself some valuable resources, provided you don’t get caught.

If working isn’t your thing, you can also do favors for other inmates for financial rewards — some of these are simple fetch quests, while others involve handing out physical punishments to fellow inmates and prison guards. 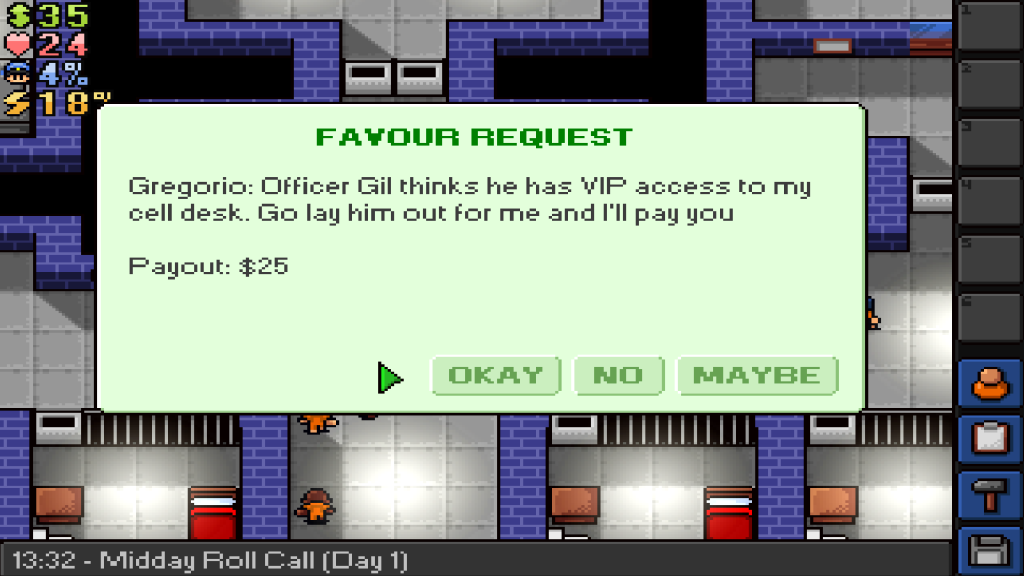 Above: Other inmates will ask favors of you. A lot of them involve violence.

I didn’t get that close to actually escaping in my time with The Escapists, but I had a whole load of fun trying. I couldn’t get hold of wire cutters to reach the air vent system, the guards spotted my bungled tunnelling attempt, and I lost my stolen prison guard uniform during a random cell inspection.

I did learn the parts of the daily routine I could skip, though, giving me valuable time to raid other inmate’s desks for gear.

I also found that losing my laundry job (for working too slowly) was actually a blessing, as it gave me lots of free time to read and work out, boosting my intelligence, strength, and speed statistics immensely.

I’ve now managed to gather together a lot of valuable resources and, given another couple of game weeks, I reckon I can get a plan together and make a successful break for freedom. So long as I don’t get caught and thrown into solitary again. 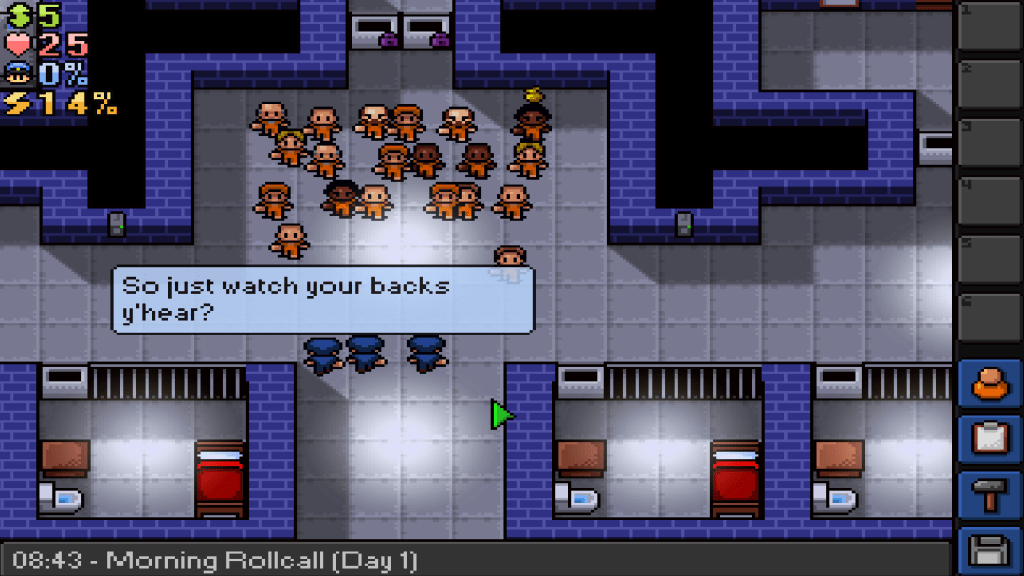 Above: Roll Call isn’t part of the prison you want to skip. If you do, the prison will go into lock down.

The Escapists already provides multiple escape routes, but the finished game will offer even more possibilities across a range of prison settings.

Players will be able to escape from various pre-defined environments, including a P.O.W. camp, and will also be able to create and share their own prison designs with the community.

One of Davis’ Kickstarter stretch goals was to add multiplayer to the game, something that would a whole other dimension to an already rich concept.

Multiplayer is a feature that seems especially ambitious, though, given The Escapists’ tiny budget. However, Davis remains undaunted and says he’ll take a look at the possibilities once he completes the core game. “There are a lot of good ideas kicking around for it, and I’m sure we can get something together,” he told me.

For now, it’s enough that The Escapists offers gamers a rare opportunity to put themselves in the orange overalls of a frustrated felon or wrongly convicted hero.

“When I came up with the idea of doing a prison game, I did a quick scout session of other similar games and hardly any came up,” Davies said. “Maybe it seemed too daunting a task to take on?” Not too daunting for the hobbyist turned full-time developer, however, who’s single-handedly resurrecting a dead genre.