This is a response to VentureBeat feature article 4 ways mobile music is becoming the PB&J of the marketing world written by Feed.fm’s Jeff Yasuda.

Every company is trying to build audience, engagement, and retention — all in a never-ending battle to build revenues. Marketers often pray for organic traffic, but many are forced to pay for audience at the top of their conversion funnels. CPI (cost-per-install) continues to increase making it harder to find the magic number for when a customer can be acquired for a price lower than their long-term value.

One of the best new ways to do this that nobody knows about yet? Music. No, really. I’m serious. More specifically, we call it MaaS or Music-as-a-Service, which has proven to be extremely good at boosting engagement — and retention — among customers.

The history of audio marketing goes back decades

In brick-and-mortar settings, music has been used for decades to entice users into parting with their hard-earned dollars. Restaurants, retail stores, and casinos to name a few have been doing this for years though various services such as Muzak and DMX which later became consolidated under the Mood Media umbrella.

Muzak in particular, which was initially known for its painful instrumental renditions of various classic songs like the Girl from Ipanema that would incessantly play in elevators and dentist offices, later became a successful company that amassed over a billion dollars annually in revenue.

Why? Well, it’s because brick-and-mortar businesses like restaurants and clothing stores understand the power that music has on consumer spending. For instance, even certain genres will have different effects on listeners.

Researchers at the University of Leicester in the U.K. found that of the various genres played in restaurants, classical music made diners stay longer at their tables but also had them buying more expensive items. Also, a different study done in a wine store found that when it played French music, more people bought French wines, and likewise for German music. What’s even more interesting is that when consumers were asked why the bought a certain wine, they had no idea.

The multi-industry successes of Music-as-a-Service

In our own analysis, we took data from numerous music installations which included games, websites, and apps. In an A/B test environment we found that when music was used, consumers spent on average 433 percent longer using a product than when music was not listened to. In addition, we found that users that listened to music came back to the product 88 percent more on average than those who did not listen to music.

Gaming in particular has been a compelling case for the use of music. We conducted an A/B test on a blackjack game built by an internal game studio at GameSalad. We first drove traffic to the game by advertising on Facebook. After clicking on the ad, the user was dropped on a landing page with a big button that read “Play.” Once the user clicked the button, 50 percent of the traffic was sent to a blackjack game that had music playing in the background and 50 percent had no music. The game was identical in both cases and also had standard casino sounds like cards being flipped and chips being collected. The background music that was used for the music variant was a mix of classic rock ranging from AC/DC to Led Zeppelin. 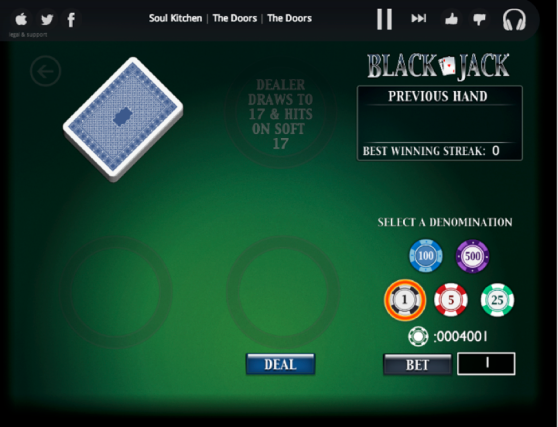 The results were staggering with nearly a 350 percent increase in session time and over 170 percent increase in retention. Moreover, it was fascinating to note that over 17 percent of the participants who played the game with music shared on Facebook that they were playing the game and listening to a certain artist.

The table below shows a few key performance indicators that we observed on several thousand unique visitors.

Sins of the past & overcoming misconceptions

While the previously mentioned results were eye-opening, we had several growing pains at the outset.

When Feed.fm launched in the fall of 2013, some of the initial customer discussions focused on how much they hated hearing music on websites. Comments like “When I hear music on a website, I immediately turn it off. That would actually kill engagement, wouldn’t it?” were frequent.

We almost immediately needed to explain that the player is an “opt-in” experience and would not auto-play music –- potentially a career damaging or at minimum an embarrassing moment if surfing a website in one’s cubicle farm. But after providing enough data and going through specific use cases, customers would end up doing a trial and they’d “get it.” This is part of why its taken music so long to emerge as a powerful marketing platform — and one that didn’t take away from the creativity of the music itself.

The other question we would often get was “I didn’t know you could do this… how is this legal?”

We operate under the compulsory statutory license for internet radio. In layman’s terms, this means that listeners would not be able to reasonably predict what song is coming next. (Or perhaps a different analogy might be that: the service works more like Pandora, not Spotify.) While I can’t speak for other MaaS operations, our team has gone to great lengths to integrate a compliance engine into our API that manages how many songs from a particular artist or album can be played in a certain time period as well as the number of skips in a user session. We also calculate and report the number of plays to the appropriate copyright agency to insure the artists are properly compensated.

So yes, MaaS is both good for businesses and perfectly legal. And rather than escalating CPI expenditures for attaining new customers (which doesn’t always mean long-term customers), music can boost engagement and loyalty for both new and old customers.

Using music to improve the customer experience has been done for decades but using music online to build engagement and retention is a relatively new phenomenon. The audio frontier for marketing initiatives is still a being explored, but it is exciting to see many well-known brands that are beginning to experiment by using music to improve the customer experience and get users to spend money.

Jeff Yasuda is the CEO and Co-Founder of Feed.fm, which provides Music-as-a-Service through its API helping brands, games, and app developers improve session times and retention through major and indie label music.