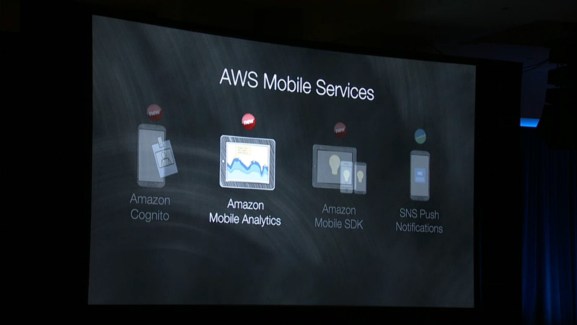 Actually, Werner, it’s been here. It’s no secret that Amazon Web Services has been lagging behind in mobile development tools. Plenty of companies are already thinking “mobile-first” and have go-to platforms for mobile app development, like Facebook’s Parse and Kinvey, among others.

But AWS has long been a favorite among developers for cloud applications, and a leader in the infrastructure-as-a-service market in general. Users of high-level services might get too tethered to AWS to leave, which is a good thing for Amazon.

One major new addition is Cognito. The service syncs user identity and data, so developers can build in authentication that uses popular logins (Facebook, Google, etc.) and easily sync app data between devices. Other platforms have the same functionality, but Amazon says it simplifies the process.

Amazon’s new analytics service, meanwhile, can analyze mobile app usage and generate reports less than an hour after receiving data from the app. Out of the box, Amazon Mobile Analytics tracks stats like monthly active users and user retention, but developers can also design custom events if they want to track usage of a certain feature or content shares, for example.

“Together, [the services] form a really powerful platform for building mobile apps on phones, tablets, and connected devices,” he said.

To help court mobile developers, Amazon plans to price these new services competitively. The discounter is offering two tiers, free and pay as you go, so you’ll only pay for the specific services you use. Cognito’s free tier will get you 10GB and one million sync operations. After you reach those thresholds, the paid tier costs 15 cents per GB of storage and 10,000 sync operations, respectively. Amazon Mobile Analytics, meanwhile, tracks 100 million “events” for free, with each million events beyond that costing $1.

Only time will tell if mobile developers will make AWS their platform of choice. In the meantime, check out Amazon’s mobile services site for more details.