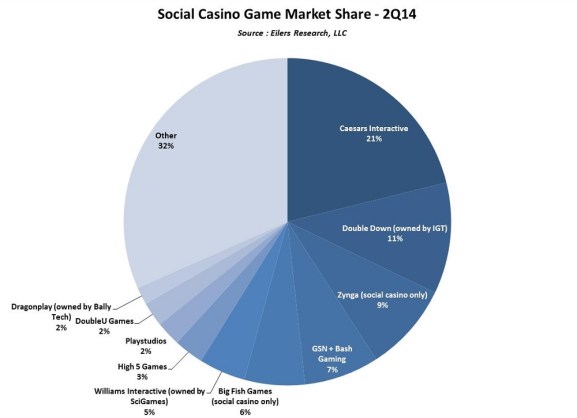 Social casino games grew 8.6 percent in the second quarter to $663.7 million, according to a report by Eilers Research. That growth isn’t as fast as it once was, but it shows that the market is becoming mature and established.

Social casino games have become a $2.7 billion worldwide industry in a short few years thanks to rapid growth on Facebook and mobile. This has prompted a lot of merger-and-acquisition deals as well as the creation of dozens of startups. But as you can see from the chart, big companies are dominating the market.

Caesars Interactive Entertainment still leads the market with 21.2 percent market share thanks to its properties Playtika, Buffalo Studios, and Pacific Interactive. Its share is more than double of the nearest competitor, IGT, the world’s biggest slot machine maker and owner of the DoubleDown Casino social-mobile games. IGT has 11 percent share, with revenue up 5.8 percent in the quarter.

Zynga is in third place with 8.8 percent market share. The company’s core app, Texas Hold’Em Poker, accounts for 74 percent of its social casino gaming revenues on Facebook. That game’s revenues fell 12.5 percent in the quarter, marking its sixth consecutive quarterly decline on Facebook. Zynga’s Hit it Rich! Casino Slots game was able to offset that decline with a 24 percent revenue increase in the quarter.

The Google Play store revenue grew 20 percent from the previous quarter. And based on first half revenue, the overall social casino sector is expected to hit $2.7 billion in revenue in 2014, compared to the previous estimate of $2.6 billion.