The new German mobile game publisher Flaregames said it plans to publish the next installment of Fieldrunners from developer Subatomic Studios.

The tower defense title is the first of a new series of free-to-play mobile games from Flaregamers, which Gameforge founder Klaas Kersting started in 2011.

Flaregames said it has hired game veteran Ralf Adam as executive producer. I am holding him responsible for making the game easier. Previously, Flaregames focused on making internally produced games. But with $12.2 million in funding from a recent round in June, the company is now cutting deals with major U.S. and international developers. Subatomic Studios of Cambridge, Mass., has said that Fieldrunners has been downloaded more than 10 million times.

Flaregames has developed and published more than half a dozen games, among them the award-winning action strategy games of the Royal Revolt franchise. The company has collected $23 million in two funding rounds and operates two internal development studios, in Karlsruhe and Frankfurt in Germany.

“Together Flaregames and Subatomic Studios are set to launch the next version of the globally celebrated Fieldrunners brand in 2015!” Subatomic CEO Jamie Gotch said in a statement. “Bigger and better than ever, fans of Fieldrunners will find this title familiar, yet highly original and innovative. In fact, we’re publicly warning players not to overdose on the massive amount of fun and excitement we’re packing into the game.”

“This is a major move for us: we have seen solid success with our own games but we’re ready to go to the next step,” Kersting, founder and CEO of Flaregames, said. “The games we developed and published gave us many things: a rock solid server toolset, extensive marketing skills, hands-on monetization expertise and more. We want to share all this with the best developers of the world.” 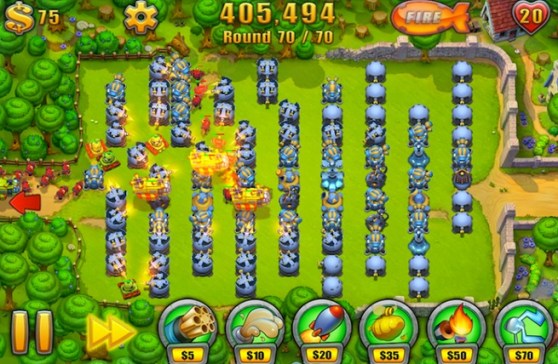 Above: Another impossible level in Fieldrunners 2