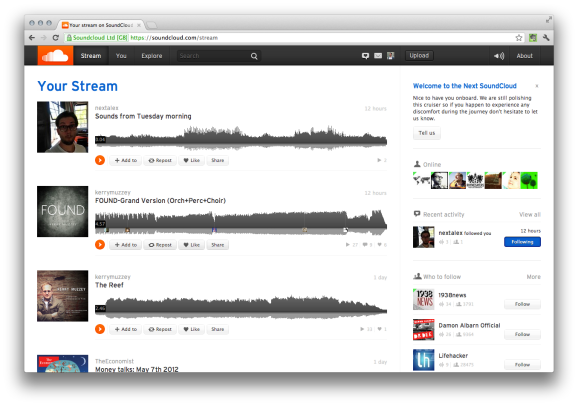 SoundCloud, the Berlin-based audio streaming site, is getting worried about copyright violations on its site.

SoundCloud is like YouTube for audio; it allows anybody to upload any kind of audio. This naturally opens the door to people uploading copyrighted audio. Just as YouTube has had to do, SoundCloud now wants to work out agreements with copyright holders over what to do when this happens

A Bloomberg report today says SoundCloud, which has 250 million users per month, has been talking to Universal Music Group, Sony Music Entertainment, and Warner Music Group to get licenses so it can legitimately stream songs owned by the labels.

Bloomberg says people close to the situation report that SoundCloud has offered the labels equity in the company in exchange for a promise that they won’t sue for copyright infringement. SoundCloud is offering each of the label groups a three to five percent stake, the people said.

SoundCloud was valued at about $700 million during a funding round earlier this year, but Bloomberg’s sources say the company would be valued at only $500 million to $600 million if its deal with the labels goes through. Companies usually sell equity in exchange for cash or loans, but SoundCloud would be trading equity for permission to play music — an unusual deal, and a costly one if the equity percentages are accurate.

Other music streaming sites, like Apple and Spotify, have had a hard road striking licensing deals with the labels to stream their large catalogs of music. SoundCloud has so far avoided this headache by billing itself as a hub for independent music and voice recordings.

But enough label-owned music is being uploaded to the site to warrant the development of a tool that detects and deletes copyrighted content at SoundCloud. (YouTube already has something similar for video and audio on its own site.)

If SoundCloud strikes the equity deals with labels, it could lead to wider talks about SoundCloud gaining access to the label groups’ full music catalogs. That would put SoundCloud in a whole new league, enabling it to compete with Apple, Google, Amazon, Pandora, and Spotify.

In the meantime, SoundCloud will pay the labels each time someone uses the service to play a song from their catalogs, just as other streaming-music services do.

The big label groups have shown an interest in using their catalogs, and the threat of copyright lawsuits, to buy into music streaming companies. Universal controls a 5 percent stake in Spotify, and a 47 percent piece of music-video service Vevo, for example. Warner Brothers also owns a stake in Spotify.