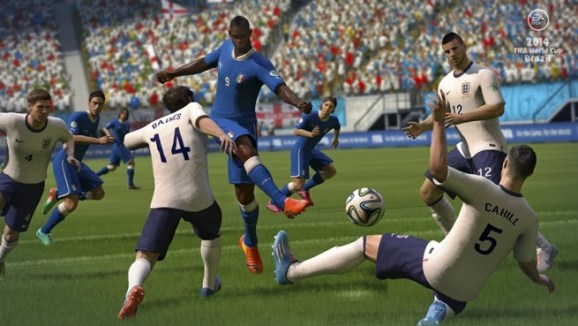 This article originally went live before the 2014 FIFA World Cup.

It’s that special time again. You know, the time when all the people around you become soccer fans — like your buddy who just learned how to pronounce the name of American striker Jozy Altidore (“al-tuh-door”) or your boss who suddenly knows all the intricacies of the 4-3-3 formation. It’s that time when the likes of Neymar and Özil compete with LeBron and Durant for the top headline in sports sections across the country.

Oh, what a glorious time it is.

World Cup season is here, and not only does that mean we have an excuse to go to the pub during work hours, but it also means we have an officially licensed game to play with. Yep, EA Sports released a full-blown 2014 FIFA World Cup Brazil title on Xbox 360 and PlayStation 3 (played here) for our enjoyment.

And with this advanced piece of software (ignoring the fact it’s only for last-gen consoles) at our disposal, we decided to simulate the upcoming tournament.

Read on to find out which pixelated predictions got us out of our seats.

1. The U.S. will find a way out of the first round

Now here’s something that’ll fire up the hardcore supporters in Sam’s Army. According to our simulation, the United States will defeat Ghana, draw with Portugal, and — in one of the biggest upsets of the first stage — take down perennial-juggernaut Germany to win its group. 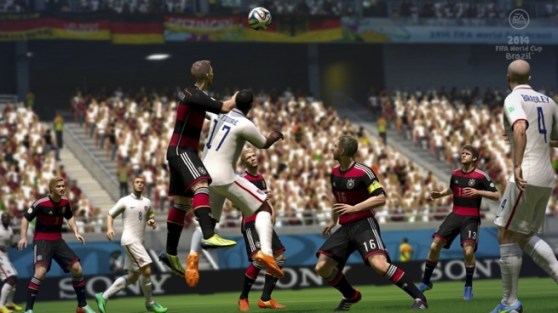 Above: U.S. striker Jozy Altidore goes for a header against Germany.

Unfortunately, the Americans’ fantastic run comes to an end during the first playoff round — one step away from the quarterfinals — when dark horse Belgium knocks them out of the competition.

But hey, that’s a showing worth chanting about.

2. Holland will be the underachiever of the tournament

Dutch national team coach Louis van Gaal once declared, “I cry almost every day. There’s always something that touches me.” Well, if the World Cup game’s simulation bodes true, van Gaal better have a handkerchief ready because the men in orange will lose all three of their matches during the initial group phase, not even advancing to the win-or-go-home knockout stages. 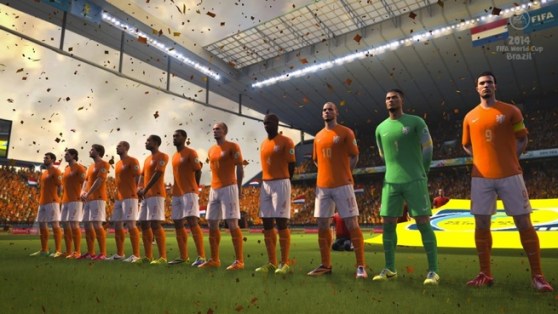 Above: The Dutch national team lines up before kickoff.

The 2010 finalists will even lose 2-1 to Australia. Hey, the Aussies play a mean game of cricket. But when it comes to (spherical) football, the Socceroos from Down Under are bringing a knife to a gun fight. As we know, though, it is a pretty big knife….

3. Neymar will win the Golden Boot and Golden Ball

While many have crowned Argentina’s Lionel Messi and Portugal’s Cristiano Ronaldo as the best players in the world, Brazil’s Neymar might be the most talented. And the sim says the 22-year-old wunderkind will score six goals, netting him the Golden Boot as the Cup’s top scorer and the Golden Ball as the number one player. 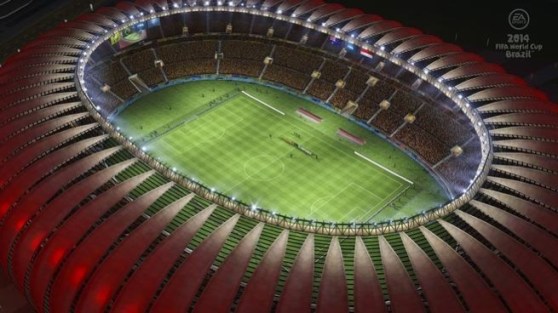 Above: The official 2014 World Cup game features all the stadiums from the tournament.

This is an extra juicy prediction because Neymar has an incredible legacy to uphold — one that includes icons like Pelé, Garrincha, and Romário. He’ll be playing in his home country and will need to perform through extraordinary pressure.

If the virtual-soccer gods are right, 2014 will be a special year for the young forward.

4. Brazil and Italy will clash again in the final

Imagine the two most successful soccer nations walking onto the pitch in a World Cup final … nine championships between them … soon to become 10.

FIFA couldn’t script it any better. 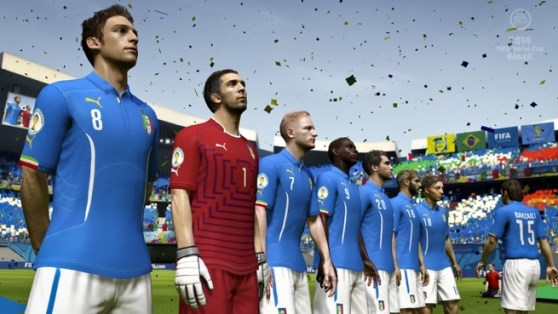 Above: The Italians made it to the final of our simulation.

Our little experiment pits Brazil against Italy in the last match, which would be the third time the two sides have met in the ultimate encounter of the planet’s biggest sporting event.

The question is, will Brazil lose at home again, repeating the Maracanaço tragedy of the 1950 final?

5. The Brazilians will add a sixth star to their crest

If our sim turns into reality, the Seleção (Portuguese for “selection”) will exorcise the ghost of 1950 and hoist the World Cup on native soil. After a 2-0 victory, the virtuosos of the beautiful game will samba their way to an unprecedented sixth championship — fulfilling the football fantasies of a raucous fan base.

South America’s largest nation will explode into a cloud of green and yellow laced with joy and adulation.

So, what does this tell us?

We don’t know yet, really. After all, we did this sim for fun. And that’s why we watch soccer — and play titles like 2014 FIFA World Cup Brazil.

The true answers will start coming when the real thing kicks off on June 12. Until then, let the Cup speculation — and barroom debates — begin.