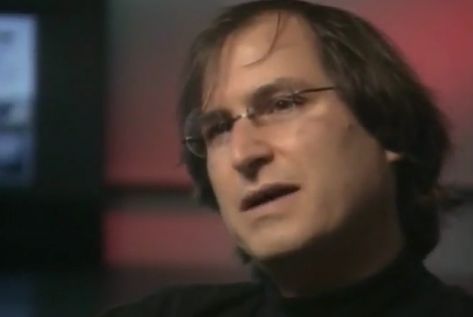 Just about every tech leader in Silicon Valley says they admire Steve Jobs, but when it comes to following his lead, where’s the love?

Visit any hacker hangout, tech firm, or investment company in Silicon Valley, and you’re sure to hear people say how much they admire Steve Jobs. They’ll say that he was the most effective CEO, the best innovator, the strongest motivator, the most ruthless negotiator, and the person with the clearest vision in the valley of where tech is going. Sure, he stepped on people’s toes, and sometimes was unfair to coworkers, but what counts is how successful he was, right?

I first met Steve in a humanities seminar at Reed College. We were discussing the Parthenon frieze, and Steve told me my opinion was full of shit. This seventeen-year-old with the shock of scruffy hair, who looked like he had been sleeping on a couch (which he probably was), told me that if I wanted to understand art, I needed to get out in the world. He was shaming me to reject received ideas and to think for myself, and he seemed willing to kick my ass to get me to do it.

It is this attitude that Jobs turned into a creed and brand at Apple, epitomized by the “To the crazy ones” commercial and the famous 1984 launch ad for the Macintosh. It is easy to admire and pay lip service to Steve Jobs’ rebel image, but why do so few in the valley today follow Steve’s lead, and why are his most important lessons largely ignored by the people who claim to admire him?

Steve was known to chasten product teams with instructions to chuck everything and start over. The cost was high to Apple, but the result was that Apple succeeded when others failed. Microsoft had tablet hardware and software years before Apple, but it took Apple’s iPad to make the category mainstream. Other companies may offer more features in their products, and release them sooner, but user satisfaction studies show that consumers often prefer Apple’s solutions.

In an era when most follow the lean doctrine of releasing a product early, and letting the market dictate product direction, Steve spent time refining the product internally until he felt it was ready to release. That requires time that most companies don’t want, or can’t afford to invest. Steve’s approach took vision—and yes, arrogance— to think he knew better than others, plus the willingness to look beyond the horizon and envision products that customers did not know they needed yet.

What would Steve think of today’s timorous innovators creating the umpteenth find-your-friends app, social sharing site, or cloud storage solution? For every Elon Musk who makes tackling three big, crazy ideas before breakfast seem easy, there are thousands of others who come to the valley to launch any project that an investor will put money into, worthwhile or not. Steve dared to shake things up, and thinking small was not part of his character.

Lesson #3 — Focus on your strengths

Many admire how successfully Steve cut projects and saved Apple when he returned as interim CEO in 1997. Steve learned a few things while he was exiled from Apple, and when he returned he focused the company on what Apple was good at and would attract customers back to the company. That required knowing his own and his company’s strengths and weaknesses, and understanding Apple’s customers. Yet, we still see companies squander energy and resources in too many directions. They should revisit 1997 and learn from Steve’s example.

When it comes to people per square mile trying to profit from others’ success, Silicon Valley rivals the heydays of the California Gold Rush. You can’t throw a USB flash drive in the Valley without hitting someone who wants to advise you, mentor you, teach you to code or pitch, or tighten up your growth hacking skills. Steve would tell you that listening to others is the route to mediocrity. You can’t “think different” when you’re taking your lead from the same people as everyone else.

Lesson #5 — Technology by itself is not enough

This is where we in Silicon Valley most fail Steve. Steve was a college dropout, but he valued learning and culture, and applied what he knew of music, calligraphy, design, and architecture to projects at Apple.

Today, young programmers and entrepreneurs in the valley are encouraged to drop out of college, or not pursue higher education at all, so they can focus all their attention on writing code or learning how to run a company. What value is Shakespeare, Beethoven, or Manet to someone who spends twenty hours a day on a computer? Apple’s products are beautiful to many because they are not only useful, but strive for something transcendent in their design and concept. The products might not always achieve that, but the effort reminds people of their own dreams.

As Steve said at the iPad 2 launch in March of 2011, “It’s in Apple’s DNA that technology alone is not enough. It’s technology, married with liberal arts, married with the humanities, that yields us the result that makes our heart sing.”

If Steve were around today, he’d kick our ass.

Rod Bauer is a principal of the Bauer Group, a consultancy that works with established and startup companies to develop and execute marketing strategies.