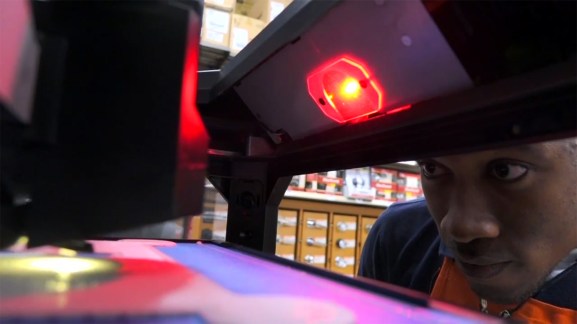 A Home Depot employee looks inside a MakerBot 3D printer.

Home Depot is bringing a high-tech twist to its do-it-yourself wares.

The world’s largest home-improvement chain now sells 3D printers from MakerBot in a dozen of its stores across California, New York, and Illinois, MakerBot announced today.

The pilot program, as MakerBot describes it, includes kiosks in each store with trained representatives hosting regular demonstrations to educate shoppers about 3D-printing tech. The companies hope to attract the attention of builders, architects, designers, and general consumers, who can use the printers to produce replacement parts, product prototypes, architectural designs, and more, MakerBot said in a statement.

Those high prices are inaccessible to most shoppers, but MakerBot’s Home Depot partnership will help generate awareness of 3D printing among mainstream consumers, if not a major revenue stream for the home improvement chain. Microsoft and Micro Center already sell MakerBot printers at their retail stores, but their target market tends to be more tech-savvy.

The consumer 3D-printing market is still in its early stages — it was worth around $87 million in 2013, according to research firm Gartner — but analysts predict significantly broader adoption of the tech over the next 10 or so years as prices drop. Presently, there are only around 50,000 MakerBot printers out in the world, five years after MakerBot was founded, the company said.

MakerBot CEO Bre Pettis celebrated the partnership in a statement:

Imagine a world where you can 3D print replacement parts and use 3D printing as an integral part of design and building work. Every day we see the magic of 3D printing becoming a reality with our customers; now The Home Depot can also see that magic. We can’t wait to see what The Home Depot customers make with our products.