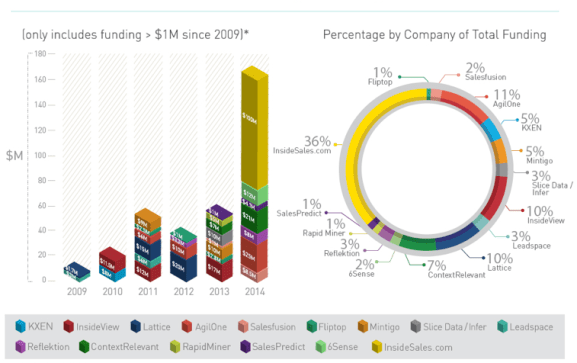 Last week, Salesforce bought sales data intelligence startup RelateIQ for $350 million. But that’s just the latest deal in the marketing tech sector, which has seen several billion-dollar acquisitions in the past couple of years.

It could also be a hint about the future: predictive apps.

While the bulk of the billions of dollars spent so far have been in the marketing automation space, with Oracle’s acquisition of Eloqua and Salesforce’s 2013 acquisition of ExactTarget, significant amounts of money are now shifting to predictive apps, which help brands understand what’s happening, and what it means for tomorrow’s mindshare and marketshare.

Such as Networked Insight, which ingests 560 million social media posts daily in order to be able to make demand predictions as much as three months ahead of time.

According to marketing apps vendor Lattice, venture capitalists have invested over $160 million so far in 2014 in predictive tools that help marketers understand how to sell better online and off. That includes heavyweights like KPCB, Intel Capital, Andreessen Horowitz, and Sequoia.

Here’s a visual view of one of the hottest categories in tech right now: marketing.