Motiga, an indie game studio, is announcing today that it has raised $20 million to build a free-to-play gaming empire. Its first major project is Gigantic, an action game where heroes battle alongside a massive guardian.

The ambitious title and large amount of funding show that the stakes are getting bigger in free-to-play gaming, which has become a multibillion-dollar market thanks to titles like Riot Games’ multiplayer online battle arena (MOBA) game League of Legends. Bellevue, Wash.-based Motiga hopes to fit into this universe with a genre-bending game that combines action and strategy in a fantasy world. The company plans to launch the title in 2015 on the PC.

In Gigantic, five players charge across a fantasy battleground alongside their guardian, a five-story-tall monster they’ve sworn to protect. Players start by choosing from a roster of unique heroes that fits their gameplay style and then aim, dodge, and leap across the map until they defeat the enemy guardian. Every battle in Gigantic enables players to earn rewards, unlock new heroes, and fine-tune the gameplay to fit their style.

“The gameplay in Gigantic is about creating opportunities to be heroic,” said James Phinney, the vice president of product development at Motiga. “Whether you’re rescuing an ally, sneaking behind enemy lines, or facing off solo against a towering guardian, there are dramatic ways to turn the tide of battle.” 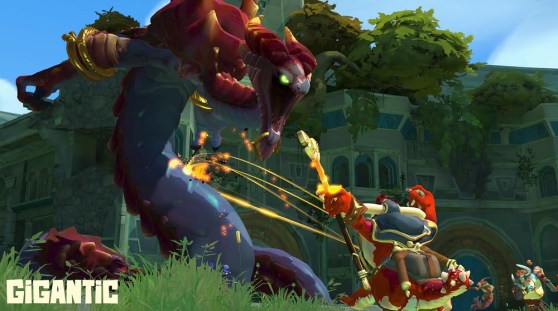 Before joining Motiga, Phinney was the lead designer of StarCraft and Guild Wars, both multiplatinum hits. Other members of the team have also worked on successful PC and console franchises. The funding came from big online gaming industry players Smilegate, NetEase, and Neowiz.

“Gigantic has been a labor of love by everyone at Motiga, and we are excited to share the game with everyone. We have been conducting small-scale public tests for the past few months and have been grateful for all the positive response from our testers,” said Chris Chung, the CEO of Motiga.

In Gigantic, players have a mystical bond to their guardian, a magical behemoth that is too powerful for a single mortal to defeat. Each guardian has unique attacks and behaviors, and players must protect the guardian to win the battle. As the battle goes on, players can choose stronger abilities on the fly and level up. One player might learn to deflect projectiles as she rides a lightning bolt into battle.

The developer promises a “vibrant fantasy world” where airships soar over ruins. The controls using a mouse and keyboard will be easy to learn, but the company says the game will be difficult to master. Motiga will deliver new gameplay with frequent content updates. Players will have the “freedom to play,” meaning they can experience the game without spending a dime.

“We are grateful to have some of the most successful online companies in the world as our investors,” Chung said. “We couldn’t be happier with partners such as NetEase, Smilegate, and Neowiz all believing in the game we are making.”

Here’s a link to the trailer.