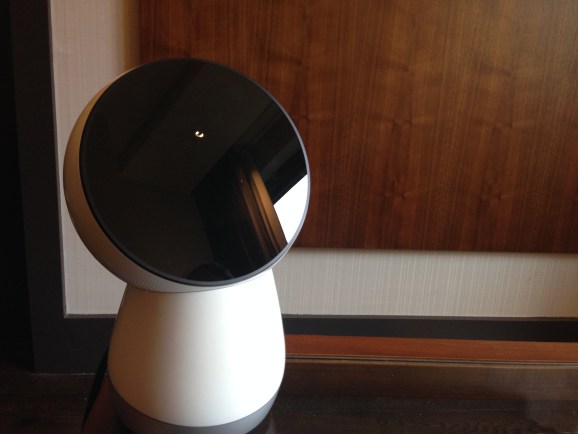 Jibo is stout with a big round glassy face and turns to greet you when you walk in the door. When I met this little device, it was sitting on a table inside a hotel room in midtown, looking like a sleekly designed minimalist version of R2-D2.

For the price of a tablet, Jibo will be your personal secretary. Once linked to your various email and phone accounts, Jibo can relay texts and phone calls to you.

Today the Jibo team is accepting pre-preorders and launching a round of crowdsourced funding so it can bring Jibo to market in 2015.

Sure there are a variety of apps that will alert you with a ping, but Jibo will actually talk to you. “Excuse me, Ann,” Jibo says in a demo video. Then he waits for Ann to respond before delivering a reminder that a friend is coming to pick her up in half an hour.

As you can see in the video, Jibo also provides next-level video chatting. Equipped with touch and audio sensors, Jibo’s face turns to the person who’s talking, making conversation feel like it’s happening in-person. Jibo also takes pictures and has a reading app, so you can upload books to Jibo’s library and he’ll do an interactive reading with cartoon images of characters and events and character-appropriate voices.

Jibo is a Cynthia Breazeal project. Breazeal directs the Personal Robots group at MIT’s Media Lab and developed the emotional robot Kismet. She’s worked on humanoids and other robots, but her real interests lay in robots that can communicate like we do, and she’s brought together a pretty amazing team to bring her vision to life.

Todd Pack, who has brought several robots at iRobot to market, is Jibo’s Chief Robot Architect; Roberto Piericcini, the team’s Director Advanced Conversational Technologies, has worked at IBM T. J. Watson Research Labs; Andy Atkins, VP of Engineering, has worked for both Android and Apple and developed a streaming platform for Netflix; and Chief Cloud Architect Rich Sadowsky hails from Symantec, which suggests that the company is making security of its cloud services a priority. Also Jonathan Ross, who’s designing Jibo’s software, has developed toys and games at Disney and company Zynga.

Breazeal says that Jibo differs from other attempts at personal assistance, like Siri, because it draws from multiple sources of sensory data. “Siri’s input is voice only, so if voice fails how can it help? Jibo is not trying to recognize everything that you say. Jibo’s not positioned to be that kind of entity,” she says.

What Jibo is positioned for is to become a hub for a variety of applications. For now, Jibo is just a vehicle for communication — a beefed up tablet with a voice like Teddie Ruxpin. But its potential is huge. Jibo’s operating system is cloud-based and Breazeal is very interested in getting developers to create applications for Jibo’s linux-based OS. For instance, an application could turn the lights on when Jibo “sees” you walk in the door. It’s not hard to see that Jibo could easily fit into the smart home market, if appliances are made compatible with its network.

Jibo is being dubbed the “World’s First Family Robot” by his creators, but from prior reporting we know there are other emotibots on the market like Softbank’s Pepper, which is also coming to markets in 2015. What Jibo offers is an approachable new device, like a tablet, but with a lot more functionality and (potentially) personality.

The goal of this funding campaign is to reach $100,000. Contributors will be able to get a Jibo for $499. Developers interested in creating new applications for the Jibo Network can snag a Jibo for $599.