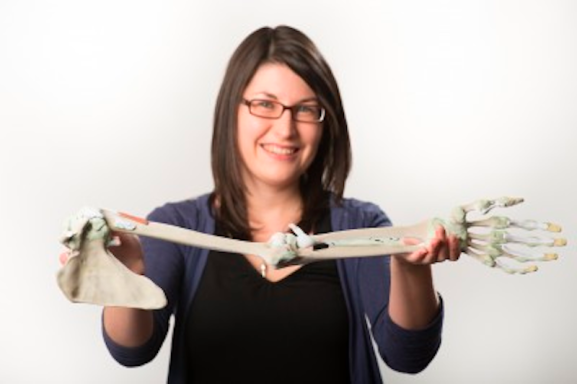 But Monash University in Australia has a solution: 3D-print the body parts.

Earlier this week, the university announced the availability of the first commercially available kit with 3D-printed anatomical body parts for medical education and training. The 3D Printed Anatomy Series, for which the school is seeking commercial partners, has no human tissue, but does feature such popular human components as limbs, chest, abdomen, head and neck.

“Many medical schools report either a shortage of cadavers, or find their handling and storage too expensive as a result of strict regulations governing where cadavers can be dissected,” said Professor Paul McMenamin in a statement. He’s Director of the University’s Centre for Human Anatomy Education, and the related research has been published in the journal Anatomical Sciences Education.

Any venture capitalist reading this will recognize that cadavers are an aging market solution, so to speak, that is dying for a shakeup. They are not only hard to find, but they’re expensive and smell funny because of embalming.

“Some people don’t feel that comfortable working with them,” McMenamin said.

The Anatomy Series’ value prop also includes the laudable fact that people don’t have to die so that medical students can learn. “Our 3D printed series can be produced quickly and easily,” he noted — plus they don’t deteriorate.

[Creepy goth editor’s note: Real cadavers are still needed for forensics research, i.e., figuring out how long bodies take to decompose in all kinds of scenarios (underwater, in a forest, etc.) to determine approximate time of death in criminal cases.]

But the Monash body parts still need to start with an actual, you know, body.

First, real body parts are scanned with a CT or surface laser scanner to get the 3D model. Then the part is recreated layer by layer, in color, using a plaster-like power or a plastic.

However, if the same venture capitalist is still reading this, be aware that, as with the do-it-yourself kit provided by Mother Nature, giving birth to human anatomy by 3D means is a skill that can easily be replicated.

The Thingiverse 3D marketplace, for instance, is already showcasing a collection of 3D models of body parts, including a human hand skeleton, an ear, and what someone accurately describes as “my customized ass.”

This means that, at some point, any competent medical school may be able to simply print the body parts it needs. So much for Monash’s first-mover advantage.

The other drawback to the Monash solution is that the use cases for discrete body parts, provided without body tissue, do not include dissection.

But that’s only a bump in the road toward body-ordering. A year ago, for instance, Popular Science featured body parts — with tissue — that scientists can already 3D print with human cells, including ears, kidneys, blood vessels, and skin grafts.

A full body reproduced with 3D printing for dissection would be a monumental undertaking. Until that day arrives, one assumes virtual/augmented reality could help fill in the missing pieces.

The seller’s market for dead bodies is, at last, coming to an end.