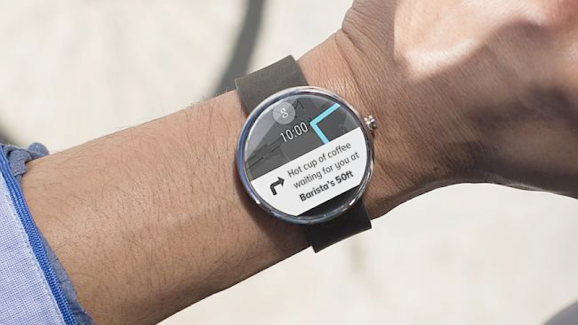 Tecsol's vision of an ad on a Moto 360 smartwatch.

You knew it was inevitable.

Screens on devices in the emerging wearable category could no more avoid ads than, say, a white wall in downtown Manhattan could avoid graffiti.

This week, India-based Tecsol Software announced that it is “working on becoming the first company to launch an ad engine for wearable devices.”

The initial imagined target: the Motorola Moto 360 smartwatch. In a post yesterday on the corporate blog, VP of sales/marketing Manjunath Padigar said a Moto 360 as a “wrist billboard” would be “awesome.”

Possible use cases, he said, include letting you know about a nearby coffee place as you’re walking on a street or, unprompted, telling you the weather forecast as you head for a calendar’d appointment. To be eligible real estate, Tecsol CTO Basil Abbas told VentureBeat, the wearable needs “at least a little amount of screen space” — like a smartwatch, unlike a Nike FuelBand.

“[We’ve] built a very basic MVC model of the [ad] engine itself, and it’s hosted in the cloud,” Abbas said. The rudimentary engine was deployed earlier this week.

A basic, static ad image can be uploaded, he said, “and pushed into the wearable device, pops up, the user can click on it or dismiss it, and it sends data back and gathers analytics.”

You know, digital ads. On your watch.

“What we’ve been trying to do,” Abbas said, “is see if there’s a good use case for this in this market.” At the moment, he said, there hasn’t yet been any user testing for feedback, since wearable devices are still rare in India and elsewhere.

He pointed to online cookie cleaners, ad blockers, and DVR ad skipping, and added that “cord-cutting” – relying on such programming sources as online video, Netflix, and Amazon instead of cable — is in part a desire to avoid ads.

Abbas suggested that ads in apps on wearables might be one path. Since health care is becoming a focus of wristbands and watches, he said, an ad relating to, say, glucose levels might reside inside a glucose-measuring app on a wearable, thus providing value.

“That’s marketers’ self-delusion,” Nail told us. “Marketers have this belief that people sit around all day thinking of their brand.”

At this stage of wearables’ introduction, he said, it would be wise to first establish the value and utility of the device itself before trying to make the case for useful ads.

“Ads are not what [wearable-buying] consumers are looking for,” Nail said.

“I expect [that] some smartwatch manufacturers will differentiate their products on the basis of a no-ad product,” Parks Associates’ senior analyst Jennifer Kent told us.

She also suggested that the “most realistic use case” is not ads on the wearables themselves, but on the paired smartphone — using “contextual data picked up from sensors in these smart wearable products.”

And if ads eventually show up in a wearable like Google Glass — a platform that Abbas said is an appropriate one — it “must be intelligent enough to know that ads should not be served while the wearer is driving, for instance.”

For ads on wearables, it seems, as much attention will need to be paid to no-use cases as to use cases.