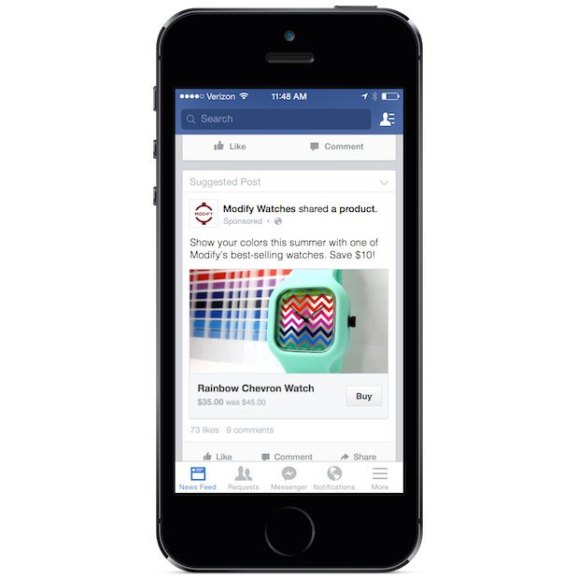 Facebook is toying with the idea of becoming a meta-marketplace with a new “Buy” button for purchasing real, physical goods without ever leaving the site.

After experimenting with “Autofill” in the last several months, Facebook is now letting you use those credit cards you keep on file on Facebook to actually purchase stuff without even leaving the site or app, just by clicking a button, according to a TechCrunch report.

Autofill lets Facebook users keep their credit card info on file in their Facebook profiles, then easily populate checkout fields with one click when shopping from merchants with Autofill integration. The idea is to use your Facebook login as your one-click checkout.

“The idea is that if we have your card credentials on file, we can prepopulate your info ahead of a purchase,” said Facebook head of retail and e-commerce Nicolas Franchet during a small press roundtable in March.

“[Right now] you click on the add, you go to Sephora.com you then have to enter your info – eventually you’d want to not have to do that,” he said.

Autofill was created to solve that problem and now the new button is taking it one step further, taking even more steps and friction away. Franchet hinted back then that this is where Autofill was headed as removing as much friction as possible, along with great ad targeting, is every advertiser’s dream.

On the advertier and merchant side, the new button will likely mean higher conversion rates from their ads on Facebook. The idea of a one-click or equally quick shopping experience is something Twitter and Amazon, for example, have also been working on. The two companies recently teamed up to let Amazon customers shop with a simple tweet, and a “Buy Now” button surfaced on Twitter a couple weeks ago, as well.

This could potentially affect ad rates, making them more valuable, although the ability of these special ads converting to sales will also depend on how well targeted they are, something any advertising platform is always working on.

And while Facebook isn’t currently charging the few merchants it’s testing the new button with, it isn’t taking it off the table. Affiliate programs are an old and solid business program, so why wouldn’t Facebook roll that out.

Back in January, Facebook announced that it would be rolling out new advertising options, including a “Shop Now” button, which is likely the first iteration of the new button.