Watson now has the weight of IBM on its shoulders.

Big Blue, the largest technology company on the planet, with 400,000 employees, is betting big on Watson, a cognitive supercomputer with artificial intelligence capabilities that learns from, and teaches, its human subjects.

Watson vaulted to fame by beating the tar out of his human opponents on Jeopardy, a show watched by millions, three years ago.

Now, under the tutelage of IBM’s Watson Group and flush with $1 billion in spending money from IBM, Watson is getting set to plant its flag in Manhattan’s East Village. IBM is throwing open the doors in September to 51 Astor Place, Watson’s new $100 million glass-walled office, for developers, designers, and data scientists.

What is Watson? The short answer is it’s a cognitive cloud-based service. Watson takes information on any topic, like medicine, physics, education, or healthcare, synthesizes the data, and produces better information from it, according to Michael DiTanna, the Watson Group’s 23-year-old senior advisor for digital strategy. Clients hire Watson as an assistant, and Watson is designed to scale expertise in any field imaginable, he said.

Using Watson doesn’t come cheap. Clients pay licensing fees based on how much they use. $500,000 gets you unrestricted access to the Watson developer cloud for enterprise, which means killer access for those buying into it.

Watson has become a call to arms in the States for those interested in helping transform IBM into a true blue disrupter with a focus on mobile, if possible.

“IBM has a long history of reinventing who they are, and this goes back to the day of the minicomputer division,” said Stephen Gold, the Watson Group’s chief marketing officer. “With Watson, we’re using the $1 billion to help advance a new era of cognitive technology.” 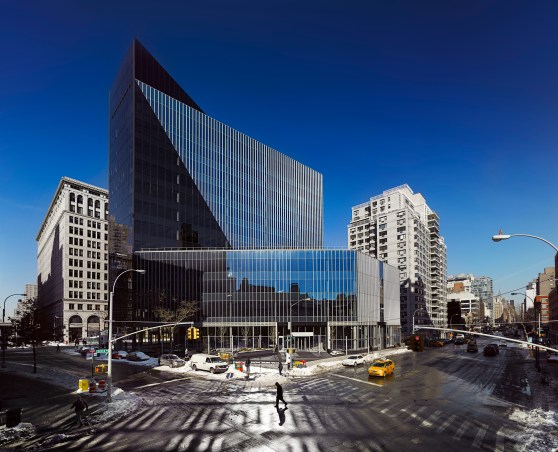 IBM created the Watson Group as a startup within the company’s vast ecosystem.

Out of that $1 billion, $100 million is earmarked for a venture fund to be spent on Watson-centric startups. So far, the fund has invested in two: Welltok and Fluid. Exact amounts haven’t been publicly disclosed.

Another $100 million was spent on the 51 Astor Place lease, not purchase, and on hiring over 1,000 new technologists. When the Watson Group finally moves into its new HQ at summer’s end, occupying six whole floors, it will employ 2,000.

Time will tell if Watson is a smash. Or a dud.

But it’s hard not be swept up in the optimism. Watson now has 800 clients and partners, like NY’s respected Sloane-Kettering Cancer Center, which uses Watson’s cloud for suggestions on treating cancer patients. At Austin’s SXSW festival in March, Watson drove around the city in a food truck, taking orders from customers and suggesting recipes to human chefs. Watson app contests have become ubiquitous.

“Think of us as the best funded startup around,” said Michael Karasick, the Watson Group’s vice president of innovations and head of its $100 million venture fund.

Karasick, a computer scientist by trade, who joined the company in 1988, spoke to VentureBeat from IBM’s Almaden research lab in San Jose, Calif.

“Watson has an insatiable appetite for data,” he said. “In fact, if it wasn’t for big data, Watson wouldn’t exist. And there’s a lot riding on this. Cognitive capabilities are making their way into lots of IBM products in order to make them smarter,” he said.

Watson may only run on a single server, but its power is undeniable. While the Watson Group is not yet open source — “let’s revisit that question in a year,” Karasick said — app developers are flocking to the platform. To support and stoke that interest, members of the Watson team are often on the road, traveling around the United States to show the curious, and skeptical, what it can do. Like, just ask it any question you want.

Karasick, for his part, asked me to publish a link for the Watson Group employment website.

For its public debut on Jeopardy, Watson processed 200 million pages of information and responded to host Alex Trebeck within three seconds, often delivering responses that were uncannily accurate. The humans trying to keep up with Watson were blown out of the water.

And based on your genetics, Watson can predict possible diseases you may face down the road.

By choosing 51 Astor Place as its New York City flagship office, IBM is also sending a message that it’s changing with the times. Back in the day, the East Village neighborhood was the turf of choice for drug dealers, pimps, prostitutes, and punks. It’s now one of Manhattan’s most expensive neighborhoods.

Analyst R. Ray Wang of Constellation Research recently went to 51 Astor Place for a series of meetings. He was blown away by the positive vibe and the open, flexible work spaces. He was struck by the sharp contrast to other IBM facilities he’s visited.

“It’s not your typical IBM office. If there’s a team that’s going to reinvent IBM, it’s going to come from the Watson Group,” he said.