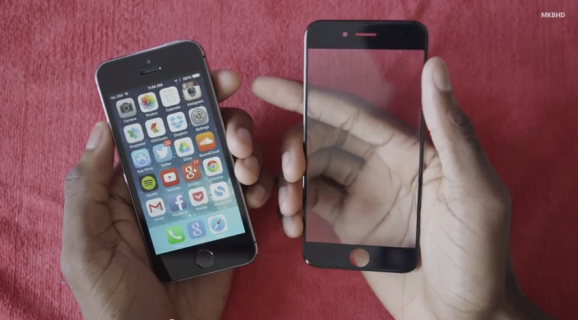 The actual iPhone 5 next to the front panel of what may be the iPhone 6.

Gadget videoblogger Marques Brownlee continues testing a piece of glass he got a couple weeks ago that he believes is the front panel of the upcoming iPhone 6.

We don’t have conclusive proof that this is actually an iPhone 6 screen. But whatever it is, it appears to be a very hard, very flexible, and amazingly engineered material.

In a previous video, Marques attacked the maybe-iPhone-6 screen with keys, a knife blade, and even bent it under his shoe — all to no effect. Whatever this screen is made of, it’s both harder and more flexible than Gorilla Glass.

In this video, Brownlee attacks the panel with garnet and emery sandpaper — both coated with extremely hard minerals.

Based on his tests, Brownlee shows that the iPhone 6 screen he’s testing is not made of pure sapphire, because it gets scratched by garnet sandpaper — and, according to the Mohs Scale of mineral hardness, garnet is softer than sapphire. In fact, he uncovers an Apple patent that refers to a technique for modifying pure sapphire so it’s more resistant to chipping, which would explain the high flexibility of the screen.

Watch the whole video for a good education on the Mohs Scale of mineral hardness and what it might mean for the iPhone 6 if this is indeed the device’s glass front.

Here are some more videos on the supposed sapphire screen on the iPhone 6.