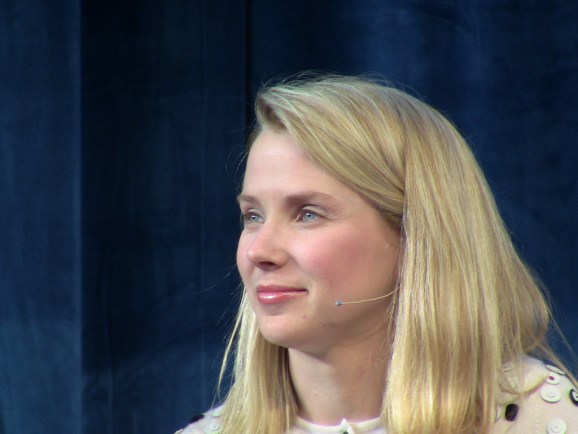 Google and Facebook account for two-thirds of the mobile ad spending tally worldwide, and by purchasing mobile analytic outfit Flurry today for a price that hasn’t been disclosed, Yahoo is hoping to level the playing field.

It will be a daunting task to catch up, but the Flurry acquisition finally shows that Yahoo is serious about becoming a “mobile first” operator, at least in the eyes of chief executive Marissa Mayer, whose tenure at Yahoo so far has been mixed.

Neither company has released the price. Press reports state the deal was in excess of $300 million. The San Francisco-based Flurry is one of the more successful mobile analytic players in the nascent mobile ad sector — which amounted to $17 billion last year and will crest $32 billion by the end of 2014, according to Gartner.

The deal, at least in the short term, makes sense to analysts.

“It does make sense because it gives Yahoo valuable insight into consumers app behaviors. It really gives them an understanding of how consumers use apps. It gives Yahoo consumer reach,” said eMarketer mobile analyst Cathy Boyle.

“Yahoo is really trying to grow their mobile business. What Yahoo has been saying, at least in their earnings report, is that revenue from mobile is growing,” Marcec said.

“Today, Flurry is entering a new phase of its life. I am excited to announce that we have reached an agreement to be acquired by Yahoo and expect to be joining Yahoo very soon. Like us, Yahoo is committed to mobile and has become a mobile first company with over 450 million mobile MAUs, a number that has grown by 36 percent since last year. Yahoo is committed to being a part of consumers’ daily life on mobile.”

“Flurry’s success is the result of years of committed investment by a passionate team to create an indispensable platform for mobile developers. We want to harness our collective innovative spirit and bolster the mobile ecosystem by providing developers the analytics and monetization solutions to drive their success,” said Scott Burke, Yahoo’s senior veep for ad technology, in a release trumpeting the deal.

Flurry started in San Francisco in 2005, and it has grown into one of the most-important companies in app advertising and analytics. The technology firm has established an especially strong connection with game developers. Those companies use Flurry to maximize revenue from the revenue that they make from their games.

More than 170,000 app developers use Flurry, and the tech firm’s SDK tracks more than 150 billion sessions every month. For Yahoo, Flurry would give them an instant relationship with a huge number of the people and companies responsible for the mobile-app economy.

Flurry has raised a total of $74 million in funding since it was founded.

Yahoo has not said what exactly the company is pulling in from their mobile endeavors. There have been vague assertions that Yahoo’s mobile search offerings grew 100 percent year over year and that half the company’s 500 million users are logging in with mobile devices. But it hasn’t released any hard mobile numbers.

At least for now.

Flurry has proven a useful conduit for companies launching advertising campaigns in the mobile arena. A few of their numbers released today show that Flurry sees app activity from 1.4 billion devices monthly; sees 5.5 billion app sessions per day; Flurry Analytics is in 7 apps per device on average; and that 8,000 publishers monetize with Flurry.

So, yes, incorporating Flurry’s knowledge base into Yahoo’s mobile strategy is a good start. But Yahoo will likely take a year or more to get its mobile game to the level of Google, Facebook, and even Twitter — if ever.

“It’s a smart way to go for Yahoo, a step in the right direction, but they still have a long way to go,” Boyle said.