Netflix has hit a high mark for subscribers, with 50 million now registered and streaming video every month, the company announced today in its Q2 2014 earnings report.

Netflix recently announced that it intended to raise prices for its monthly service, choosing first to boost rates for new subscribers and gradually raising the price later on for current customers. The move apparently hasn’t affected the company’s subscriber growth, but that may change in subsequent quarters. Hastings, however, doesn’t think this will be a factor.

“I think we’ve already seen the impact on the price change, and its pretty nominal,” Hastings said during the company’s live video presentation today. “Retention could be a hair better from the grandfathered subs, but it’s only a dollar increase.

“I really think it’s background noise, which is exactly what we want it to be,” Hastings said. “When we make small changes in price, and handle it appropriately, there really makes no noticeable impact on the overall business.”

We’re going through the letter to shareholders now and will update you with more info in a bit. For now, check out the table below from today’s earnings report. 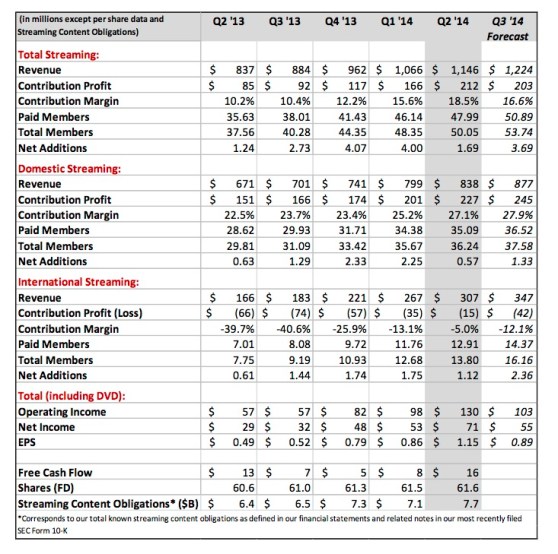