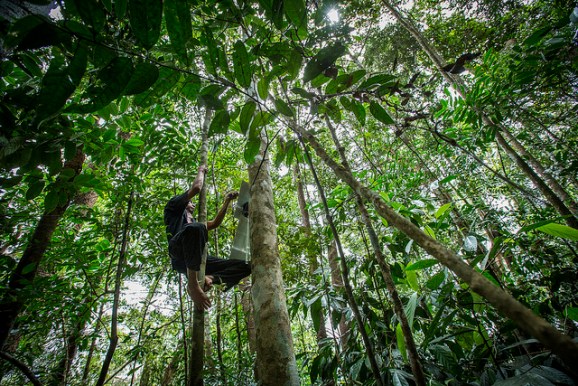 When VentureBeat broke the Rainforest Connection story just three weeks ago, the startup was seeking $100,000 in Kickstarter funding to help detect, report, and halt chain saw activity in the world’s fast-shrinking supply of rainforest — by using recycled smartphones as chain saw detectors.

Blowing through the $100,000 goal in less than three weeks, the tiny company is nearly doubling the request to $195,000 on Kickstarter. The added funds will enable an increased number of pilot projects.

In addition, the publicity has helped the company form two new partnerships with tribal groups in impacted regions:

These partnerships are intended to help protect native lands that are under destructive threat from “massive black market illegal logging operations.” Loss of rainforest is considered the second leading cause of global warming, according to the original report.

Rainforest Connection’s technology marries surplus Android smartphones with a novel solar array that powers the phones 24/7 under the rainforest canopy. Special software monitors the smartphone’s microphones. If the phones pick up the distinctive sound of chainsaws — from as far away as a kilometer, or about half a mile — the software calls a pre-determined number to summon help. White both invented the solar array and developed the software.

Speaking for the Tembé In Brazil, Vasco M. van Roosmalen of ECAM said, “The technology being developed by Rainforest Connection is an extremely powerful tool for the protection of rainforests, especially in our case — when combined with the on-the-ground presence and determination of local indigenous groups serving as guardians of their traditional lands which occupy over a quarter of the entire Amazon region.”

With a population of a mere 1,500, the Tembé recently won a large victory that gives them title to over 600,000 hectares of rainforest. Protecting the area has been a challenge. The Tembé report massive illegal logging operations on these lands, five to 10 trucks at a time on narrow dirt roads, hauling timber illegally out of the Amazon rainforest.

The Panama pilot program in the Mamoni Valley Preserve, in partnership with the Guna indigenous population and Smithsonian-supported nonprofit Earth Train, is up for consideration. RFCx is proposing a plan to protect thousands of acres of rainforest, starting with a pilot that initially covers up to 5,000 hectares. The pilot will test device connectivity, monitor access points and explore potential coordination with other technology applications.

As the original Kickstarter campaign enters its fourth and final week, RFCx funding expansion is offering $40 carbon certificates to the public to protect endangered rainforests and protect enough carbon to  “take your car off the road.”