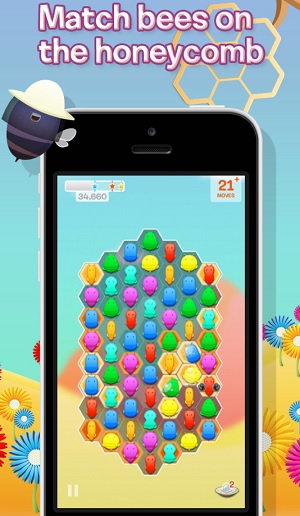 Above: Action from Disco Bees.

Scopely will also help Space Inch monetize the money-flinging title Make It Rain, which hit No. 1 on iTunes in the U.S. and six other countries. People have downloaded Space Inch’s Make It Rain more than 10 million times.

The companies will collaborate on more titles in the future.

Culver City, Calif.-based Scopely creates custom strategies for publishing, distributing, and marketing games from its own developers as well as external parties. The firm hopes to take existing titles like Make it Rain and help them make even more money.

“Space Inch is one of the most innovative independent game developers in the U.S. with three very creative titles in a row with Say the Same Thing, Disco Bees, and Make It Rain,” said Walter Driver, co-founder and CEO, Scopely. “We couldn’t be happier to leverage our publishing platform to help take their games to the next level.”

Disco Bees is a modern and cheerful take on the typical match-three puzzle game. Filled with colorful creatures and tunes arranged by Andy Ross, the guitarist for OK Go, the title combines charm and deep design. It is one of many gem games aimed at knocking King’s Candy Crush Saga out of the top ranks.

“Partnering with Scopely is a win, a validation of our work, as well as a significant leap in helping us optimize business opportunities for the games that we have crafted with love,” said Josh Segall, partner at Space Inch. “Scopely’s track record in catapulting games into high earners and building long-term player engagement has us very excited about working with the best in class.”

Scopely, founded by Driver and others in 2011, wants to be the partner of choice for elite mobile studios. The company has more than 85 employees and 35 million downloads to date.

Los Angeles-based Space Inch is an indie startup with titles such as Say The Same Thing, Make It Rain, and Disco Bees. Disco Bees already has more than 3 million installs. Make It Rain became a No. 1 hit after just a few thousand dollars in user acquisition.

The Space Inch founders are an eclectic bunch of high school and college friends who didn’t have a lot of experience in games. They include Segall, a former criminal lawyer; Ross, programmer and guitarist from OK Go; Ari Kardasis, former architect and self-taught programmer; and Nicholas Reville, who has 10 years of experience at nonprofits. Space Inch has 16 people.