In January of this year, Vice President Joe Biden was told he had 180 days to research a solution to unemployment in the U.S.

A few months later, in April, he met with a dozen or so entrepreneurs and tech professionals to discuss a possible course of action. With two months left to go, the group had to create and implement a strategic plan — good thing start-ups work a lot faster than government.

“Why are there so many people who are chronically unemployed and 5 million jobs going unfilled?” That’s the big question, says Allyson Willoughby, a senior vice president at Glassdoor, standing in an airport terminal on her way to Washington, D.C. She’s en route to the White House for Vice President Biden’s job strategy announcement.

Allyson was one of the professionals present at Vice President Biden’s meeting, all of whom are members of Tech for America, a non-profit organization devoted to improving the relationship between public and private sectors.

One of the major problems the group identified was a disconnect between job seekers and job locations. “And we all thought, wouldn’t it be cool if there was a national database of jobs that was presented in a more digestible way,” says Willoughby.

Glassdoor, an interactive job board with gobs of employment and company data, seemed like a natural fit for the project. Add in national population data, localized unemployment data, and the concentration of job types in a given area, and you have a pretty powerful employment tool.

“The vast majority of data is stuff we already had,” says says Glassdoor’s senior data scientist Vikas Sabnani. “We have 24 million users, more than 95 percent of all open jobs in the country, and millions of resumes.”

The company’s data revealed that one out of five job seekers don’t search for jobs within a certain locale. And at least a third of all jobs that users click on are outside of a person’s home county — meaning many people are willing to move, for the right job. 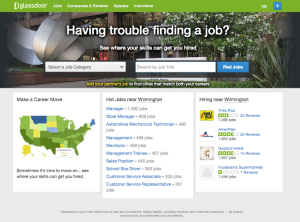 Since Glassdoor already is a national database of jobs, they decided to update the existing platform with new tools as a part of Vice President Biden’s unemployment initiative. The new Glassdoor interface is simple. Put in a search for “nursing” and you’ll get a map of all the available nursing jobs in the country. Clicking on a state will narrow the selection to all the nursing jobs in the state by county. Areas with a lot of nursing jobs will appear a mossy green, while areas with sparse job opportunity are lighter. Want to see if there are relevant jobs for your spouse in the same area? Glassdoor will allow you to search for both jobs and then generate a map showing where those jobs overlap the most.

You’ll also be able to look at the work trajectory of other people in your field, which could be a helpful for people looking to make a career change. Let’s say you’re a truck driver looking to do something that involves less travel. Glassdoor will let you see what other areas of work people who have previously worked as drivers have gone onto.

Ultimately the Glassdoor’s new features aren’t just about bringing job seekers to a single website — or so Glassdoor claims.

“The goal was never to make just a Glassdoor tool. We created a tool that we’ll have live on our site, but we definitely want people to come in and use it and make it better,” says Willoughby. The company is keeping its API open so other developers can help advance their technology. She also says that the technology could help make state employment platforms more user friendly.

Glassdoor’s new features are just part of a larger plan for curbing unemployment in the U.S.

At 9 a.m. PT  Joe Biden will make an announcement revealing the rest of his strategy for bringing down the unemployment rate.