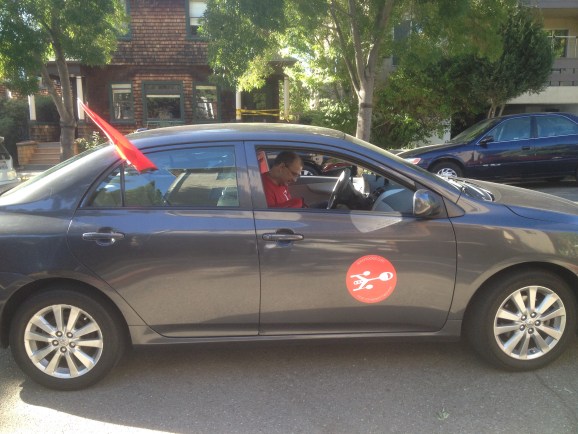 The food delivery startup SpoonRocket threw its first dinner party yesterday in San Francisco, and its website crashed due to an insane volume of traffic.

In theory, everyone in San Francisco can order a $1 SpoonRocket dinner from 5 to 9 p.m. on Monday and Tuesday, July 21 and 22. However, the website was down shortly after the party started.

“We totally underestimated the demand in terms of the traffic coming on our website,” SpoonRocket co-founder and chief technology officer Anson Tsui said in an interview with VentureBeat this morning. “Yesterday at our peak, we were literally doing, like, 100 orders every 10 seconds.”

Food delivery service has been really hot in San Francisco. SpoonRocket raised $11 million in venture funding in May while Sprig raised $10 million in March.

Several startups are vying for the top spot in the food-delivery business in San Francisco. SpoonRocket’s competitors include Sprig, Chefler, and Munchery.

The site was back online around 6:30 p.m. but it showed that food was sold out momentarily. A number of customers got frustrated and complained on Twitter and Facebook about not getting the dinner. People who were hungry and didn’t want to make their own food turned to other food delivery services, including SpoonRocket’s competitors Sprig and Munchery.

“We offered them a chance to actually get a meal,” said Ashwin Cheriyan, chief executive at Thistle, in an interview with VentureBeat. “We did a one-time promo. Customers can get a meal from us for 50 percent off to try it.”

According to Cheriyan, Thistle extended its normal operation hours from 7 to 8 p.m.. “If you look at the average number of orders during that hour that we normally receive, we more than doubled our business in that same hour frame that SpoonRocket was down,” said Cheriyan. According to him, Thistle will monitor Twitter closely tonight and see if they can do the same thing again.

However, SpoonRocket has been patching up its website and getting ready for its second day of the dinner party. “So basically, all last night, we just spent time optimizing our site,” said Tsui. “Today, we are going to keep the changes we made yesterday. We don’t anticipate it going down, but we are just going to have a whole team monitoring it.”

In terms of delivering hundreds of meals in a short time, it doesn’t seem to be an easy task. “We will definitely have every body on the road,” said Tsui. “It’s gonna be challenging, wait time could be longer but we are gonna go through it.”

If you don’t want to make dinner today and want to order the SpoonRocket meal, let us know how it goes.