If the world can raise over $61,000 for potato salad via crowdfunding platform Kickstarter, why can’t a satirical news program on Comedy Central launch a campaign to buy CNN for a cool $10 billion?

Well that, at least, was the punchline for a segment on The Daily Show last night, which saw host Jon Stewart launch a parody campaign to buy the cable news channel that’s routinely the subject of ridicule on his program. The show’s producers even went to the trouble of creating a standalone website, LetsBuyCNN.com, to help sell the joke — although the site itself is just a photoshopped version of a Kickstarter campaign page.

“CNN, America’s first 24-hour cable news network, has been terrible for many, many years,” the site reads. “Does it have to be that way? Who knows, maybe it does. So let’s find out for ourselves!” 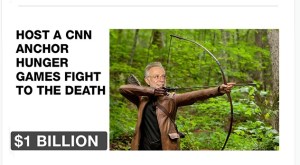 Above: One of the prizes for The Daily Show’s fake Kickstarter campaign to buy CNN.

[Side note: There’s no way Wolf Blitzer would get to that bow and quiver when his competition is Anderson Cooper, Erin Burnett, and Chris Cuomo.]

Check out the the segment below; it’s pretty funny and worth your valuable time.