Reddit launched a new feature today targeting users who want to keep others updated on a breaking news topics in real-time.

The Reddit Live tool, which launched as a beta version back in February, is essentially a live-blogging tool that’s tailored to Reddit. It was developed after the Reddit team noticed a growing trend of submissions that saw users constantly updating a post with new information as it became available. The regular Reddit submission process wasn’t built for that purpose, as it limits the number of times you can update a post, doesn’t allow you to alter the headline, and won’t let you collaborate with other Reddit users.

For example, after last year’s tragic Boston Marathon bombings, a handful of users provided a real-time account of the situation that required seven total submission threads over a 32-hour period — primarily from one user. It was also difficult to weed out incorrect facts from those types of submissions, leading to the spread of misinformation.

The new “Reddit Live” tool focuses on making the process easier. There’s no limit on the number of updates someone can make, and elements like headlines, descriptions, and individual updates can be edited or deleted at any time. You can also specify who can make real-time updates to the thread (and how much control each person has over the post) by adding a person’s Reddit handle. And making a Reddit Live submission is a pretty simple process, as is closing or deleting the submission thread. 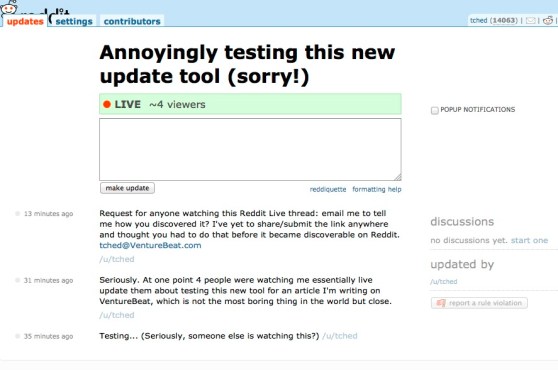 Above: A screenshot of the newly launched Reddit Live reporting tool.

Initially, Reddit Live posts live outside the regular “subreddit” (aka categories) submission ecosystem — meaning Reddit Live posts won’t show up on the main site where you can vote or comment on them. You can, however, share a link to a Reddit Live post with the general public, or even submit that link to a particular category on Reddit proper. But while testing the new tool, I did notice a handful of people were watching it (as you can see from the screenshot above), despite me never having shared the link anywhere.

Typically, Reddit has always used the same submission process for everything, but the Reddit Live tool definitely was built for a specific kind of submission. It’ll be interesting to see if the company decides to use this same strategy for other distinct types of user submissions, like photo galleries, anonymous submissions from disposable (aka “throwaway”) accounts, etc.